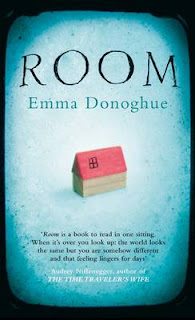 5 year old Jack and his Ma live in Room. To Jack this is the whole world and everything else outside isn't real. He doesn't know that Old Nick who visits at night and brings them Sundaytreat is really his captor. Then one day his Ma tells him the truth about outside and that they need to get free.

This was recommended at my book group a while back and I was intrigued (although it was suggested as a Halloween title and I still have no idea why). The whole book is from the point of view of 5 year old Jack. A little off putting at front but in the end a fantastic idea. You see how Jack views Room as a home. He then has to get used to outside having no idea what to make of everything. There were times though when I felt just as exhausted as his Ma and Grandma must have felt.

I found the subject to be fairly disturbing as you would expect. A young women held prisoner and raped repeatedly for 7 years. There were times that I wondered why I was continuing with it. I have read many a book with difficult plots so I don't know why this one bothered me more. Maybe because I kept thinking of all those news stories where women were found after being held captive for years. Seemed too real maybe. Still, I couldn't put it down and as I had to know what was going to happen.

So whilst it was a good book and it will stick with me for a long long time I am not sure I enjoyed it. I do recommend it though so long as you don't mind the narrator being a 5 year old.

Edit: Having thought about it I didn't dislike the book. It just made me feel uncomfortable. The theme was disturbing and whilst that normally wouldn't get to me it did in this case. Also very uncomfortable by the fact that Jack was still being breast fed at the age of 5. A little hard to ignore since it's mentioned quite a lot through out the book.
Posted by KarenSi at 13:59