Snowdrops by A. D. Miller 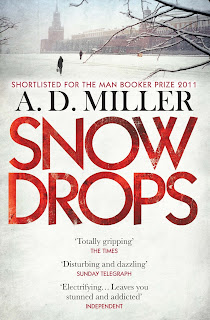 Nick is a British Lawyer working for his firm in Moscow. Until recently he had kept himself to himself and just soaked in Russian life. He then meets the enigmatic Masha and discovers that for her he would maybe consider staying in Russia. Slowly Nick uncovers Masha's secrets but only too late. By then he is too entranced by Masha to do anything about it.

This book has been on my radar ever since I saw it on the Man Booker short list last year. I am fascinated by Russia and I loved Russian history at University (the very little we got of it). However, this book has to be one of the most depressing views of this country I have ever come across. Granted the country has gone through some tough times and the people there have had to do what they can to survive. This book paints such a bleak view though. Everyone in this book is corrupt and the impression that we are given is that the same is said for everyone in Russia. There is no such thing as a good deed or sympathy for fellow mankind. I am sure that this is a scoured view. Every country has it's good and bad.

Getting away from that and going to the plot itself I wasn't at all impressed. I guessed early on what was going to happen and did think the character was either naive or kidding himself not to know either. I expected some big twist at the end because it was so obvious and then that didn't happen. As I reached the end I wanted to toss the book across the room. I also never really too to Nick. He was selfish, arrogant towards his family and completely blind to what was going on around him.

The books saving grace is the writing. It is well written despite all that. Very descriptive and the words had a nice flow to it. It was also easy to read. Had everything else come together this could have been a great read.
Posted by KarenSi at 22:24