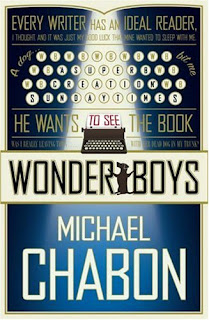 Grady Tripp is a writer. He has had a few well received books and is now working on his latest called Wonder Boys. The problem is that he has been working on it the last seven years and can't seem to end it. Instead it keeps growing and at 2611 pages it's still nowhere near the end. Meanwhile he is teaching at the local college, his wife has left him and he is having an affair with his boss's wife, Sara. When Sara tells him she is expecting Grady has one of the strangest weekends in his life with one of his students in tow.

I've only ever read on other Chabon novel and I loved it. I knew this one was going to be very different so I read it with no expectations. Not as good as Kavalier and Clay but I still liked it. Grady isn't one of the most likeable of characters and yet I did. Everything that went wrong in his life was his own doing and yet I couldn't help but feel sorry for him. You want to give him a bit of a shake and tell him to grow up but then if he did this crazy weekend wouldn't have happened.

There isn't much of a line between Grady and his students. It's almost as though by going into teaching he is re-living his own student days. One of the girls has a crush on him and is living in his basement. Another is dragged along on Grady's mad weekend (to be fair this student did create a good bit of the madness). He spends most of his time working on his novel and smoking pot.

Chabon actually wrote this because he was was struggling with another novel himself. In that way alone he was Grady. The character of Grady was based on a teacher he had himself in the 80s. Scary but not hard to imagine that such a teacher existed. Mind you he must have been good at teaching as all of these students did seem to look up to him (well, all but one). Grady manages to keep his envy of these young talents to himself. Although to be fair to Grady it's not the destructive kind of envy.

The story itself is one of those that has you laughing and cringing at the same time. You want to hide your eyes from the situations Grady manages to get himself into and yet you want to carry on reading. It's well paced and over all too soon. If like me you have read Kavalier and Clay please don't even try to look for similarities. There are none other than it's a well written book. Looking forward to seeing what else Chabon has in his back list.
Posted by KarenSi at 09:07