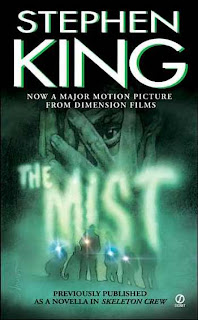 David Drayton, his wife and his son are residents of a small lake town. One night the lake is hit with a huge storm which leaves the town with a huge clean up the next day. David is sent by his wife to get some supplies. His son and the pretentious neighbour go with him but before they leave they notice a thick fog travelling across the lake. David has a bad feeling about it and tries to encourage his wife to go with him. Once in the local supermarket that feeling doesn't go away and it seem the mist has travelled with them. It soon becomes clear that anyone who enters the mist is attacked in some way. The three end up trapped in the supermarket with a handful of other shoppers. All of them wondering how long it will be before the creatures outside will get in.

I didn't realise that this was a short story in Kings book "Skeleton Crew" (yes, I know it says so right at the bottom). I actually thought that I had read Skeleton Crew but obviously not because I would definitely have remember this story. This one has the makings of a fantastic King story if only he had expanded on it in true King style. Yes, that's right, I have found piece of writing by Stephen King that is not long enough for me.

So here is what you have a post apololyptic story. A military base nearby is the probably cause (although this is just guess work by a few of the locals), we have a few of those military in the supermarket, there is the pig headed male who won't listen to reason and has his wee band of followers, there is the cute little boy who just wants to go find his mum, there is the artist dad and hero who really just wants the same and lastly there is the crazy lady who develops her own band of followers. Each of these things could have been expanded on to make a fantastic novel. Granted, these are all themes that King has touched on in the past.

The creatures in the mist I am always skeptical over. I am sure that's been done before too and not by King. It goes back to being afraid of what you can't see (or don't understand). Something that King excells at so I was soon able to ignore my skepticism and struggle to sleep without the light on. What can I say, I'm a big wimp. The ending too irritated me although I read in the blurb at the end that this was deliberate. King wanted it to be ambigous but to me that was more opportunity to expand into a bigger novel.

I have two fun facts for you. Well, I read about it somewhere so may not be fact. The first is that King supposedly wrote this after experiencing a storm in his hometown and he then got sent to the supermarket. The second is that if you read the Dark Tower graphic novels the mist and it's creatures make an appearance there although the Dark Tower world have a name for it. I really should get round to reading those graphic novels. And to reading the rest of Skeleton Crew.
Posted by KarenSi at 16:30