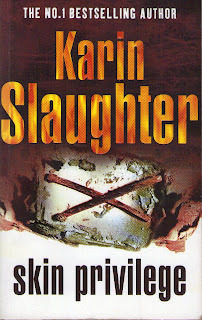 Police Chief Jeffrey Tolliver has been called in to a nearby county to try to get one of police officers to talk. Lena Adams was found watching a burning car with a body inside and she's refusing to talk. The local police can only assume that she somehow has something to do with it. Tolliver and his wife are unable to get her to talk. Instead she becomes hysterical with fear and manages to escape so she can do her own investigating. Tolliver isn't scared off easily and he stays on to find out just what happened to his officer. The town though has other plans as they don't want someone else getting involved in their affairs.

This is the first book I have read by this author. Probably not the best book to have started with since it turns out this is the last book featuring these particular characters. It was obvious early on that this wasn't the first as the characters had so much history and there was a lot of references to things that had clearly happened in previous books. That didn't put me off in the slightest however. There was enough explanation that I knew what had happened before and it's relevance to the main story. Instead of being irritating it has me curious to read the others.

As I said the characters have a lot of history and so are well developed. It didn't feel like I was expected to know them and I managed to develop a connection the characters regardless of having only read this one. A good sign I think. Tolliver's wife, Sara, was the only one I couldn't take to. She seemed a little too cold for me. Still she had been through a lot in previous books and perhaps I will feel differently when I go back and read them. Lena seemed like one of those unpredictable characters. Always causing trouble despite good intentions. I can't wait to read more on her. As for Tolliver he just seemed like your typical role model. He's made his own mistakes but is a steady rock for his team and his wife. A good combination of characters.

I liked the story itself. A small town in Southern America with problems of bigotry and meth habits. It's told from each of these characters points of view (not in first person though) and this makes for a lot of cliffhangers. I was kept on edge quite a lot through out the book. I liked that for the most part. I think though that the book was a little too long. Whilst there was lots going on I was starting to get a little bored before it set up for the ending. Only a little though and it's my only real criticism of the book. I also had a hard time believing who was behind it all in the end. The character didn't seem anywhere near intelligent enough to have organised it all even with help. Still I wasn't expecting either that character or another's involvement. I was kept guessing right to the end.

What an ending too. The very end was completely unexpected and if you have read this book you will know exactly what I mean. I can't say with out spoiling it. What I will say is that the ending made me glad I had read this book first. I would have been seriously annoyed had I read this series from the start for it to end there. Instead I could appreciate it and I can't wait to go back and start at the beginning. A gutsy ending by the author I think.
Posted by KarenSi at 05:33