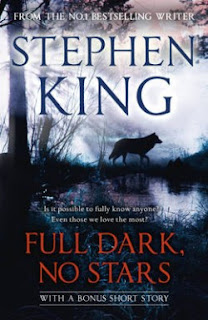 Four short stories/novellas; 1922, Big Driver, Fair Extension and a Good Marriage. In 1922 a farmer contemplates killing his wife so that he can hold onto his land. In Fair Extension a man with cancer is given the choice of selling out his friend in order to become cancer free. In Big Driver a woman decides to get revenge on her rapist. In A Good Marraige a wife discovers the truth about her husband.

I wasn't sure about this book when I first started it. I was told to stick with it though and you should never judge a book of stories by its first one. At least that's what I tried to tell myself when I started 1922. It wasn't badly written. It was actually well written and was a great start to the theme in this collection, revenge. I just didn't take to it. I didn't take to any of the characters. It's the only one in the book where the main character isn't the one doling out the revenge but is on the receiving end. Despite the fact that it isn't my particular favourite I can appreciate it and overall I did enjoy the book.

The other stories I enjoyed much more. They seemed more characteristic of King. Particularly Fair Extension which was set in that town all King fans know and love, Derry. I was going to say that it was the only tale which had a ring of the supernatural about it. That's a lie though as 1922 did too (although you could say that it was all in the mind of the narrator). But with Fair Extension there was no doubt in your mind although I think both are typical of Kings supernatural horror style.

The two stories I haven't mentioned are also typical of King. Using the darker side of humans as a method to bestow horror on its readers. The rapist in Big Driver and unfortunately to tell you the dark side in A Good Marraige would be spoiling it for you. It seemed obvious what the husbands story was once the wife began searching but I wouldn't take that discovery away from you.

A little brutish in parts but overall I liked this collection. I said that 11.22.63 was the best of Kings latest books but I am going to have to change that opinion to this one.

Oh, and on trying to remember the bonus short story I was looking it up and discovered some facts about 1922 (the story) that I wasn't aware of when reading. It's set in the same place as the home of Mother Abigail in The Stand, Ben from It moved there and it appeared in another short story but I don't remember it.
Posted by KarenSi at 01:21