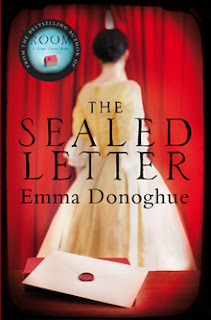 Emily Faithful (Fido to old friends) has become successful in her own right. Almost unheard of in Victorian London. She is a woman of business and has dedicated her life to helping secure the freedom of women. Bumping into old friend Helen Codrington could change all that. Helen is unhappy in her marraige and is having an affair with a young officer. Somehow Fido is dragged into Helen's life as it spirals out of control. Soon the courts are involved and Fido's reputation and lifes work are in danger of being tarnished forever.

This is actually based on a true story. There really was an Emily Faithful who fought for womens rights before the suffragette movement. Her name was then tarnished as she was associated with the scandal of her friends very public divorce. Until round about then divorce was a difficult thing to come by and until the laws changed very few people would sought after one. Charles Dickens was mentioned in the book as one of the first to take advantage of the new laws. I found the historical aspects all very interesting. There is even a section in the back which tells you where the author expanded on the facts and what happened to Emily after the events.

As for the story telling itself I quite enjoyed that too. It wasn't at all what I had expected. I have to be honest that I didn't pay much attention to the blurb as I picked this up after reading Room by the same author. It's nothing at all like that first book and could in fact almost be written by a different author. I felt that the author did very well in writing for that period and whilst she obviously used artistic liscence for some of it (particularly thoughts, feelings and conversations) I didn't feel like I was being duped. Instead I was intrigued by Emily who appeared to be intelligent and yet could follow her friend so blindly. Although, I confess that I was duped a little by Helen too and didn't realise just how calculated she was until near the end. At that point I wanted to shake Emily for continuing to believe her friend.

What interested me too was the affect this all had on Emily's reputation. Of course it had an affect on the cause she was fighting for. A cause that was difficult enough to get support for without a tarnished reputation. Then there was the ending. I had never really heard of Emily Faithful so that ending was a little surprising to me.

A good piece of historical fiction. Especially if you like those which are based around a real event.
Posted by KarenSi at 01:24