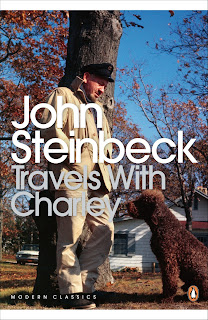 Already one of Americas most celebrated authors Steinbeck decides to travel round America. Despite writing about America for years he believes he doesn't really know it. With a truck all set up better than a mobile home he heads out. Of course he takes trusted dog Charley with him for company. His goal is to not only see America but to get to know it and the people who make it.

Every time I pick up a book by Steinbeck I am reminded once again how much I love this author. I thought that this one would be different since it's not fiction (although I believe that some claim it is). I put off reading it because I didn't want to be disappointed. At the same time I was fascinated with the idea of this author traveling round the States with only his dog for company.

I needn't have worried as I was immediately lost in his words. This man can write. Fiction or non-fiction it doesn't matter. I bet he could make a computer program manual sound interesting. The book starts off with his reasons for taking this trip and his organising. Normally I would be frustrated at the point and just wanting him to get to the trip itself but with Steinbeck I was happy just to enjoy it. I loved the sound of the truck he had made specially for going and it sounds like others were fascinated too as it turned into a talking point wherever he went.

As he sets off I knew there was one part that I loved more than the others and that was his sidekick Charley.  I have never had a dog but I understand that owners see them as people sometimes. This is the same as Charley. I fell in love with Charley from the first page and Steinbeck was funny with his stories of him. Many a time he argued with Charley as though he were a real person and more often than not Charley got his own way just by giving him a look. If I was ever to have a dog I would want it to be like him.

The travel aspect was interesting and he did see a lot of country side and meet lots of people from all walks of life. Most people were happy to talk to him although everyone was reluctant to share their political views. Steinbeck clearly likes people and does his best to understand them. This shows when he is given a recently vacated room to clean up in in Chicago. Instead of getting washed he begins investigating who the person was that had the room before him.

As the book nears it's ending Steinbeck has clearly had enough of travel and just wants to be back in his own home with his family. He doesn't hold back on how he feels there and for that I admire him. My only criticism of the book is that I didn't come away with a better understanding of America. There wasn't enough interaction with others as it mostly contained Steinbeck's thoughts and feelings. Not that that wasn't interesting but I would have liked more about the areas he visited as well as the people he met.

A fabulous book all the same and I can see myself reading it again in the future. On that note I am now only one book review behind, woo hoo!
Posted by KarenSi at 01:18