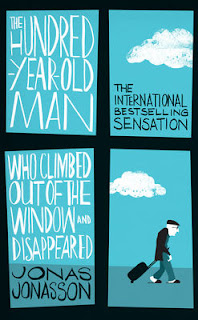 Allan Karlsson is a resident of a nursing home. He is about to celebrate his 100th birthday and the home is organising a party for him. A party he doesn't want, especially if there is no chance of a vodka. Looking at the window he decides he has had enough and climbs out. Not really knowing where he is going to go he decides just to go with where life takes him. A philosphy it turns out he has lived by all his life. He might not have expected, gangs, a police chase, murder and an escaped elephant. However, he learned early on not to expect anything.

I picked this book up on a whim when I was in my nearest book store having coffee. Nothing else had appealed to me that day (I know, shocking) and was just about to leave having given up when I spotted it. The plot appealed to me and I have to say it didn't disappoint. It's been described as or compared to Forrest Gump. It's easy to see why as you get into the book. The chapters are alternated in that one is about Allan's escape and adventure. The other is about Allan's history right from birth. That's when you know that this sort of thing isn't new to Allan. The Forrest Gump part is that Allan seems to have played an anonomous and yet important role in just about every historical landmark from near birth to the day he goes to the home. The fact that Allan just goes along with it adds to the humour of the book.

That and Allan claims to be apolitical. Having a father whow was a political activist made Allan resolute in having no part to play in politics and yet politics always happened to him (a lesson maybe for those who don't believe politics affects them). It made for a rather amusing read also helped by the writing style. I would probably describe it as dry humour as it wasn't always obvious when Allan was being deliberately funny.

I am not sure which sections I preferred the most. I looked forward to both and whilst they both, of course, featured Allan they still read very differently. Without a doubt I think this is going to be one of my favourite books of 2013.
Posted by KarenSi at 02:04