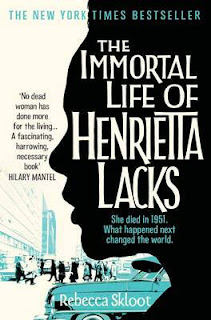 Scientists and biologists all over the world will have heard of HeLa cells and may even have used them. What they might not know is that they were originally the cancerous cells of a woman named Henrietta Lacks. Henrietta Lacks died in 1951 from cervical cancer but her cells still live on today. They have been celebrated for breakthroughs in medical research such as the polio vaccination. However, when Henrietta died she didn't just leave some cells that were taken without permission. She left behind a young family whose lives were turned upside down after her death. They knew nothing about Henrietta's cells until years later and they struggled to get information as to why these cells were taken, what it meant to them and why so many were benefiting whilst they struggled to cover simple medical costs. Rebecca Skloot became intrigued with the person behind the cells and as a result brought recognition to Henrietta's family and a little bit of peace.

One of those rare books where the author was able to bring together both the science and the family story. The book flashes between the past where Henrietta's story is told from the very beginning to the present day, where Skloot tries to convince the Lacks family that she is only after the real story. As a result you end up with the best of both worlds. It was cleverly done.

Clever in other ways too. The author shows just how much those cells have helped with medical breakthroughs. The big one is the one I already mentions, the Polio vaccination. They also continue to be used and it is hoped still that they will give an insight into cancer. So on that side I found myself intrigued and amazed that this small group of cells could do so much. On the other hand you are made to see what the family went through and you have to wonder was it worth it to them. They certainly didn't benefit. Instead their life has been make more difficult and it's almost as if their mother and wife was taken away from them. At no point did anyone sit down and explain exactly what it meant.

The author pushed it further by talking about the ethics of it. The cells were taken against the wishes of Henrietta and her family. It brought about the fear of being taken away and experimented on which wasn't as far fetched as you would think. It certainly opened my eyes.

A fantastic read, full of information with a human side. It was easier to read than most non-fiction as it was almost told as though it was a story. I would definitely recommend it.
Posted by KarenSi at 18:53