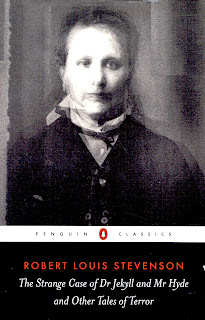 Two very close friends of Dr Jekyll have begun to notice some odd behaviour from Mr Hyde and have begun discussing it. It mainly concerns his friend Mr Hyde. Mr Hyde is an odious little man who ran over a small child without caring or looking back. Somehow the kindhearted Dr Jekyll has given Mr Hyde the run of his home and sole heir of his money should he go missing for any reason. Both friends are naturally concerned and begin investigating what possible hold Mr Hyde can have over Dr Jekyll and how they can help. Little do they realise that Dr Jekyll and Mr Hyde are one and the same person and Dr Jekyll is quickly losing his hold on life.

I loved this book the first time I read it and loved it just as much this time round. It is set up well. It begins slowly with the concern of Jekyll's two close friends which at first seems like mild gossip. It's a short tale which progresses very quickly into horror as these two friends begin to believe that Dr Jekyll is in danger. It then finishes with all the horror out in the open as we hear from Dr Jekyll himself and he reveals that he is losing himself to Mr Hyde. Very well done for such a short story.

It's not just a story of horror but of good versus evil. Here Dr Jekyll is a mild mannered man who is well thought of by friends, colleagues and his servants. He tries to rid himself of his darker half and instead ends up battling his darker side and losing. It symbolises what many people go through internally as we all have our own dark thoughts. You can't help but feel sorry for both. Dr Jekyll for his failures and the horror of his failure and what he has to live with as a result. As for Mr Hyde, as horrible as he is, all he wants is his freedom and he is fighting for it in a big way.

A fantastic book and I do recommend it to everyone. It's nothing like Treasure Island and for that reason I always forget that it is Stevenson who authored the book. For some strange reason I have it stuck in my head that fellow Scot, Arthur Conan Doyle, is the author and have to correct myself.

This was re-read for The League of Extraordinary Gentleman challenge and the main character we are focusing on is of course Jekyll and Hyde. The character has changed somewhat for the film. The film version has Jekyll as a much younger man and Hyde as a larger, hulk, like man. In the book Hyde is much smaller than Jekyll. In both though Jekyll is fighting his darker half and is loath to set him loose whilst Hyde is constantly fighting to be free.

Hanna of Booking In Heels is the organiser of this challenge and you can see what others have been reading for it here. In case you missed it from my previous post this was May's post and June's will be Dorian Gray.
Posted by KarenSi at 05:55