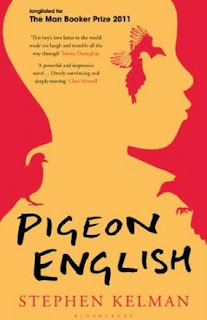 Harri is a young boy from Ghana living in London. He loves life in the city although still misses his old home and hopes that his dad, gran and baby sister will soon join him, his mum and sister. One of his class mates has been murdered and he and friends decide to investigate to find the murderer. When he isn't working on that case he is trying to teach the local gang that their missions could be done for good but first he has to join them. He loves a girl in his class, trainers that make him run fast, Haribo and the pigeon that comes to visit.

I'm not sure how old Harri is meant to be but I assume he is quite young. Possibly about to reach his teens (anyone know what age Year 7's in England are). It's written from his point of view and it could be that he just seems younger because of the cultural differences. He has such an innocent way of looking at the world and believes that everyone is capable of doing good things. Then at the same time he is like a typical boy from London. It's almost as if he is trying to bring the two versions of him together.

It is quite a sweet story almost as Harri is very endearing. You can't help but like him. About half way through though I began to find that the writing seemed repetitive and Harri's continued naivety was starting to grate a little. I think it had more to do with reading the thoughts of a young boy.

The story did pick up again and I think for the last 70 pages or so I didn't want to let the book go. We know early on from Harri's own investigations who killed the young boy but Harri himself seems unawares and is slowly but surely getting himself into bother. In the end it was a good read and I have to admit that the ending surprised me. This book was longlisted for the Man Booker prize last year but didn't get further than that. Having since read a couple I don't think it was one of the stronger contenders but again it was an easy read which seemed to be the theme last year (in my humble opinion).
Posted by KarenSi at 23:29