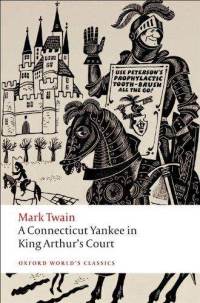 A man mysteriously talks about King Arthur's court as though he has been there. He then leaves some papers with a stranger and encourages him to read. The papers are an account of this man's time in court. How he tried to change the way those people worked and how he was sent on his own crusade by King Arthur himself.

When I picked this up I was hoping for/expecting something light and extremely funny. Sadly that's not actually what I got. Whilst there was plenty tongue in cheek the book took itself a little too seriously, I thought. First the humour was really a ridicule of the King Arthur legends. It strips away the romantic view everyone has of King Arthur and his court. The men and women are slobs. The men make up or exaggerate their tales of adventure before King Arthur. Everyone realises this but it's all part of the ritual. The ladies are crude, laughing and making jokes that would make a women of Hogan (the time traveler  era blush.They are also none too bright.

Once Hogan manages to save his own neck he believes that he can change the way the world works with him as the leader. This is where the serious part comes in. He spends much of his time trying to remove power from the church and put it in the hands of the man. He sets up a school to educate the masses. When he is sent (against his will) on his own quest he rescues prisoners and sends them to his schools. He brings about commercialism and advertising.

Had I known that much of this was going to be an essay on the power of the state and the church I probably would have left it to another time because it's not what I was in the mood for. That's not to say it wasn't a good book./ It was, it just wasn't what I wanted at that time and as a result I didn't enjoy it quite as much. I also found the narrator, Hogan, to be quite irritating. He was quite pompous and so sure that he was right. Quite a lot of the time he made a bit of a fool of himself but he was also Twain's mouthpiece. On the plus side I was amused at recognising some of the stories thanks to John Steinbeck.

I read this as part of the classics challenge hosted by Katherine of November's Autumn. This months prompt is about the last chapter read. As I tend to wait until I finish the book before doing these prompts I am going to go for most memorable. For me that would be the first chapter. The one in which the story is set up. The person who comes to read Hogan's story is admiring a portrait of King Arthur's court. As he does he notices that one of the figures in the painting has been damaged so you can't see the features. It's then that Hogan approaches him and claims to have known Arthur. We can guess that Hogan had deliberately damaged the painting so that he wouldn't be recognised. This set up makes the book sound more promising and more like what I was expecting.
Posted by KarenSi at 22:37