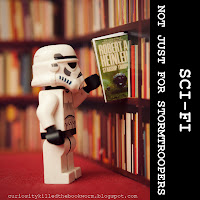 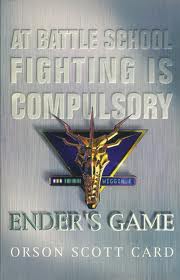 Ender has been watched from a very early age. His brother and sister are also geniuses but they failed to make the cut. Now Ender is the last hope. Only he can stop the alien's who once devastated Earth from doing so again. First though he has to be put through some rigorous training and testing at military school. All rule book is thrown out the window in order to test Ender to the fullest. However, if pushed too far they could break him which would mean all is lost.

I wasn't sure what I was expecting with this book. I just knew that sci fi and non sci fi fans seem to love it. Glad to say that I enjoyed it too. Surprising considering this book is about a 6 year old genius who is expected to go through military training and save the world.

Yet, love it I did. The premise does seem a bit rediculous. No matter how intelligent Ender is a 6 year old doesn't have the emotional intelligence to go through what he was put through. I was able to get past that though because Ender was such an engaging character. Occasionally he would come across as a 6 year old who has been taken to a strange place and won't see the people he loves for years to come. This is shown on his first night when he has been deliberately isolated from his class mates.

The majority of the book is set in the military school. As Ender becomes used to something (and as the reader becomes used to the situation too) those in charge deliberately through in challenges or change the rules so that Ender has no time to get comfortable. In this way the reader also has no time to get comfortable. You don't want Ender to have to deal with more challenges for the characters own sake but these challenges keep the book pacing along.

About a third of the way through we see things from the point of view from Ender's equally intelligent brother and sister. Peter is cruel with a hard side which was why he failed to make the cut. Something he has been bitter about. Valentine is loving and caring, too soft which was why she failed. Peter though plans to use his intelligence to manipulate the political scene on Earth with Valentine's help. Through them this gives us a good idea of the history of Earth and it's politics. In this way we are given a bigger view instead of just Ender's need to prove himself and defeat the aliens.

I very much enjoyed it as a whole and enjoyed each of the characters, the good and the bad. I understand this is just the first book in a series and I think that I will be reading the rest at some point. It was a relatively easy read. I can see why my local library classed it as YA. I also think that the non-sci fi fans may like it for it's psychology and political aspects. I read this as part of the sci fi challenge hosted by Ellie of Curiosity Killed the Bookworm. If you want to see what others have been reading you can do so here.
Posted by KarenSi at 05:23