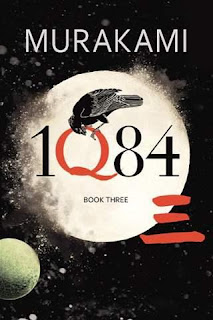 The last book in Murakami's trilogy. Both Aomame and Tengo are ins seclusion and both have someone after them. Both are continuously thinking of each other despite not having seen each other since they were children. Tengo is staying with his father who remains comatose in a hospital in an isolated town. He stays there longer than he originally planned just in the hopes of seeing another vision of Aomame. Even if that means he might become stranded there. Aomame is herself in hiding from the religious group she attacked. On her first night there she spotted Tengo in a park staring at the moon. She is now determined to stay there in the hopes that he will appear again. Even if that means her life is in danger.

I know, I know, I finally read the last book. I read the first two back in November last year. That's almost a year between reading (you can see my review for the first two here). I didn't lose my excitement or my enthusiasm for these books. I just really hate reading from hardbacks no matter how much I was looking forward to it. Anyway, I got there in the end.

You would think that because of the huge gap I would have forgotten everything. That's the way my mind normally works. I would usually have to read the first two again. This time I didn't have to. The book sort of gives a brief synopsis of what happened without you realising it's doing it. It's threaded into the story without being dull or annoying (some of those 'last time' chapters irritate me). Murakami was clearly thinking of people like me who hate those update starts but at the same time need them (am sure he wasn't really thinking of me but it makes me feel good to believe he was).

I have read in the last year that this third book doesn't quite live up to the others. I have to say I agree. Once again it was a slow start in true Murakami style. This time though it seemed even slower and I didn't think it was ever going to pick up. Maybe it was the introduction of a third characters point of view that slowed it down. I'm not totally convinced on that though as he was the only one that seemed to be creating any tension or excitement. Tengo and Aomame were just waiting for the majority of the book.

It did pick up eventually though and once again I was glued to the pages of the book. I do think this third character (who is only mentioned in the first two parts) had a big part in that. There comes a point where both Aomame and Tengo are under such close observation you can't put the book down for fear that something will happen without you.

You can call these books surreal, fantasy-like, alternate world and a number of other things. What I think it really comes down to is a love story. Aomame and Tengo made a connection as children. Now that their lives have crossed paths they are constantly in each others thoughts and all they want to do is to come together again.
Posted by KarenSi at 08:23