No One Left To Tell - Karen Rose 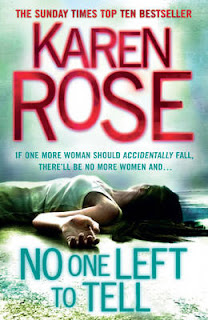 Paige is training to be a PI. Not long after her training begins she is asked by a woman to look into the imprisonment of her son. Along with her daughter in law, she believes that he was set up to take the blame for the murder of a young girl five years before. Paige has her doubts but agrees to take the case. When the son's wife is murdered trying to bring back information Paige loses her doubts and decides to do her best to clear his name. This puts her in danger as someone doesn't want anyone revealing the real murderer or the sordid reasons behind it.

First of all I had intended on more mini reviews but I have one or two books in that list that I need to review independently because they are part of a challenge or because they deserve their own reviews. So I will have to catch up without cheating.

This is one of the latest (if not the latest) book by Karen Rose. I had started to read them in order but this was one of those books I picked up on a whim. To be honest it's not the best of her books but it was perfect for what I needed at the time.

I was able to guess early on who was behind the real murder and some of the reasons behind it. Although I didn't guess the full extent of the crime. Guessing that early on didn't matter though. It's how Paige and Grayson got there that mattered. As they uncovered the mystery they also broke down their barriers and fell in love. Atypical of Rose's formula for her books with an obvious set up for a future book on another tortured couple.

Again that didn't bother me because, as I said, it was what I needed at the time. I needed something light (take out some of the violent content and you get light). I needed something that I didn't need to think about. Most importantly I needed something with characters I could engage in that would allow me to escape from exams and starting a new placement. That is exactly what I got and as a result I enjoyed it. I looked forward to heading home and picking this up.

If you like a wee bit of crime with a bit of romance  thrown in then this is ideal. If you haven't read Karen Rose before though start with her earlier books. I'll be going back to where I left off with those next time.
Posted by KarenSi at 20:03