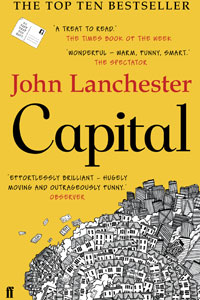 Pepys Road in London started out as a street for the middle class. A group of people not especially well off but able to hold their own. Over the decades this has changed along with the houses themselves and before the market crash they could be sold for a couple of million. Just before the market does crash the street is filled with an interesting group of people. A powerful bank manager, an old lady who was born in her house, a young footballer just discovered and a family who own the corner shop. The only thing each of them have in common is that they live on the same street. One day though they start to receive strange postcards. The postcards state "We Want What You Have" but there is no clue as to where they came from or why. As the months pass the cards keep coming and eventually they change to become a little bit sinister.

I didn't feel this book really went anywhere in terms of a story but I enjoyed it. It kind of just followed the path of all these people without really doing much other than living normal lives. I quite liked that though and each of the characters were interesting. The only character I didn't particularly like was the arrogant banker and his selfish wife. It was hard to like them since all they wanted to do was get filthy rich and cause each other pain. However, they did  pave the way of us seeing into the life of their builder, Zbigniew. He wasn't particularly nice at first either. Also quite selfish at times and to busy working on his plan to make money to enjoy life. He was an interesting character though and I liked how he developed. I liked the old lady, the family who owned the corner shop and even the young footballer. I enjoyed each of their sections and looked forward to them coming round again.

As for the main plot line. At first those cards were really only a way of seeing into the lives of these people. They connected them as each of them would have very little to do with each other. Only the family who owned the corner shop would have any real reason to interact with others in the street. Each of these groups of families react to the cards in a different way. The old lady ignores them but her artist grandson takes an avid interest. The father of the young footballer finds the cards sinister from day one. When the cards do take on a slightly darker tone this brings in the police and it's then that the book truly focuses on them.

I have to admit that at first I didn't think I was going to enjoy the book. However, it quickly grew on me and in the end I was sorry that it was over. I also had an invested interest in each of the characters and I found the outcome of some to be quite sad. As to it being outrageously funny, I wouldn't go that far although it did have it's moments.
Posted by KarenSi at 03:18