The Perks of Being A Wallflower - Stephen Chbosky 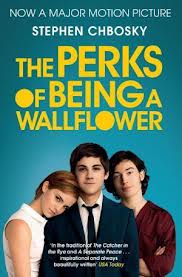 It's Charlie's first day at high school and he's a little bit apprehensive about it. Hi older brother is off to college and his sister would like the world to be unaware of the fact that they are related. Unlike his successful siblings he isn't popular. His best friend killed himself the year before and their other friend has a whole new set of friends and would like to forget the years before. Charlie is too shy to make new friends and feels awkward doing it but has promised his favourite teacher to join in. This is where he meets Patrick and Sam. Although they are seniors they accept Charlie and he becomes a part of their group. Through them he experiences acceptance for the first time. It gives him a way of forgetting his past and putting those demons away. Problem is when things don't go well for Charlie they want to come out and haunt him.

This is one of those books I wish I had read as a teenager but still enjoyed now. I think I would have loved it back then. I was awkwardly shy at times and could in some way relate to Charlie. Charlie is a great character. You read some of these recent YA books and the teenagers don't sound like teenagers. Not so with Charlie. Although he is bright it wasn't hard to believe that he was 15. His language and emotional maturity seemed about right for his age. He didn't have the Dawson Creek factor. The book is written in the form of letters to a stranger. We never do find out who that stranger is but that's kind of the point. Charlie needs to talk to someone who isn't in his life and this way we see his first year at high school unfold.

As for the other characters I loved them too. Patrick and Sam were outsiders in their own right too but had their own group of fellow outsiders. People who didn't care if their intelligence showed and knew their own mind in terms of music, films, books and of course a shared love of The Rocky Horror. To be honest they sound like a fun bunch and I loved each of them. The kind of group I would have loved to have been a part of myself.

The book was written and is set in the 90's. It's easy to tell with the obsession of the mixed tape. I went through that obsession too and have many memories of friends and I sharing mixed tapes (although our music taste was nowhere near as cool as these guys). I loved the soundtrack to this book and I don't mind admitting to looking some of them up. As well as the music there is a list of books that Charlie is given to read by his English teacher. Quite a few I have read and quite a few I haven't but I am thinking of picking up. Unlike The Silver Lining Playbook though there is no real spoilers here. So it doesn't matter if you haven't read the books mentioned.

As for Charlie's demons/ghosts I can't say that I was expecting them to turn out to be quite what they were. You already know that Charlie has a sad story in his past and you think you know what it is until you reach the end (or near the end). It gives that book that hint of sadness. Well more than a hint but not the crying your eyes out kind.

For a small YA book I got quite a lot out of it and I might have to go out and buy a copy for my own collection. It's a book that I would pass on to my kids when they are young teens (if I had any). The week I finished reading this I watched the film too and I was pleasantly surprised by it. It didn't deviate much at all from the books. The small changes I could live with. It's understandable that films based on books can't put everything in it but this one retained all the important scenes. It also had the songs I had hoped it would, mainly The Smiths which the book talks about regularly. I don't normally bother with soundtracks in films but I would have been annoyed had the film ignored it. Oh, and Charlies books were there too.

So if you haven't read the book or seen the film I recommend that you do.
Posted by KarenSi at 21:51