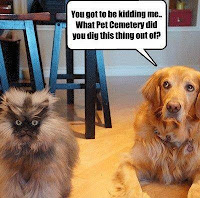 This photo has no relevance to this post other than the fact that I found it highly amusing and it (sort of) links into my previous post about Stephen King. I should really read that book again at some point.

Well, January and February may have been slow for me book wise but March certainly wasn't. I read more than both months put together. A good month even compared to last year. I managed a total of 10 books. Most of them were good ones too. Here's my list;

My favourite of the bunch is Ready Player One. I didn't have to even think about that. It was a geekfest from cover to cover and a good story to boot. There was nothing in there that I didn't like. Plus to get a dystopian that's actually a little fun is unusual.The Woman Who Died A lot, The perks of Being a Wallflower and Amsterdam were close in the running. As I said most of them were good. Sunset Limited though. I am still mulling it over. I don't think that will ever really leave. Did You Miss Me was the only one I didn't enjoy at all.  As I said in my review I think I am over this series.

Last month I finally paid a visit to the library (first of the year I'm ashamed to say) and bought some lovely books. I also managed a fair number of reviews although I am still behind. I am also still behind on my good reads goal but I am catching up and I should catch up in the next week or so.

For this month I have no real plans. Got another visit to the library this week. Have to return some books and it would be rude not to get a few more. I plan on finally catching up on all those reviews and my good reads goal. On the cards I have John Connolly, Janet Evanovich, Thomas Hardy and possibly Charles Dickens.

It's the Dewey's Readathon this month too. I didn't expect to be able to take part because of exams but I will have finished them by then (27th April). Sadly I still can't as I have other plans already. It will be a long day so don't think I will be able to join in even for 12 hours. I will be looking forward to seeing how everyone else gets along.

Anyone else got any plans this month?
Posted by KarenSi at 09:43