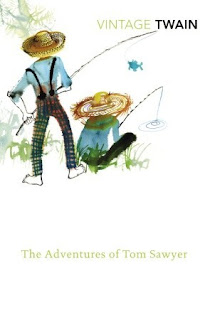 Tom Sawyer and his brother are living with his aunt Polly and his cousin Mary since the death of their parents. Polly loves her nephews dearly but Tom can be so trying. A loveable boy who seems to find trouble without actually looking. In this short book he manages to find love, become a pirate, see a murder, find treasure, cross his nemesis and get himself lost.

This was a re-read for me and a good one. I was looking forward to reading it again. I loved this book the first time. It was one of many books that I was recommended to read as a kid but since it was about boys I wasn't interested. In all honesty I don't think I would have appreciated it back then for that reason so I am kind of glad that I read it in my 20's.

Tom is definitely one of those characters you can't help but love. He has the best of intentions which always seem to get him in trouble. I can imagine most boys reading this book and being able to relate to most of it.   I was so amused by everything he got up to.

It was all told with such humour too but a sort of dry humour. I loved the incantations Tom whole heartedly believed in. He believed that nothing worked without one and if it didn't work even then a witch must have interfered with it. One (of many) example is he buries a marble says an incantation and this marble is then supposed to attract all the other marbles he has ever lost. Of course every time he does this he forgets where he has buried the marble.

Reading this book you certainly won't be bored as Tom is very rarely ever bored. He is always up to something and as a result I found myself powering through the book. I was actually quite sad by the time it had ended. I am sure that wasn't the end of Tom's adventures.

The reason I read this again is that it is part of the League of Extraordinary Gentleman challenge hosted by Hanna of Booking In Heels. Tom is the character we are focusing on this time. As much as I love him I think he is the odd one out so far. He is just a typical little boy unlike all the other characters in the League. He is the protege in the graphic novel and film. An adventurer which sort of fits but he still stands out among all the others. I wonder why the author picked him. If you want to see what people have thought about the other characters you can do so here.
Posted by KarenSi at 03:45