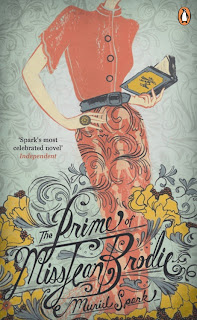 Miss Jean Brodie is a teacher at an all girls school in Edinburgh. She believes in teaching her girls about art and culture and literature. The curriculum is an inconvenience to her and she tends to ignore it. Only her style of teaching will make her girls the creme de la creme. As a result she is considered a rogue element in the school and the head mistress would love nothing more than to be rid of her. Her girls however, are fiercely loyal to her even after they move on to the high school. They become known as the Brodie set, each famous for something. Miss Jean Brodie continues to have prominence in their lives as she teaches them her own personal beliefs and involves them in her personal life.

I have been putting off writing this review. Every time I have sat down to do it I have set the computer aside. Basically, I don't think that I could do this book justice. From the first page I was in love with the book. Miss Jean Brodie is seen through the eyes of one of the set years later. This girl is a rather strong character who has quite and impact on Brodie's life. Yet the strength of Jean Brodie's character still shines through.

We also learn about each of the girls as the book continues. In reality none of them are actually that special or outstanding. What really makes them special is their association with Jean Brodie as they move through school. As school nears it's end that association becomes less important to each of them. Sandy is the one girl we learn the most about as she is the one reflecting back on those years. Sandy is the most dedicated to Brodie but the one who is more aware of her flaws. I have to be honest that I'm not sure I liked Sandy but then I don't think I was really meant to.

It is wonderfully written. I have the advantage of living near Edinburgh and have been there many times. So I suppose it is easy for me to get lost in those pages and imagine myself there. However, I do think the writing has a big part to play in it. I believe that I would be able to imagine just as easily had I never visited the city. Jean Brodie comes across as one of those teachers we would all love to have so long as we are one of her chosen girls. In a short space of time the book is able to show how much she is loved by the girls for that reason to showing all her flaws. It was certainly well done.

I haven't seen the film version but after this I do want to. I love Maggie Smith and I would like to see how she portray's Jean Brodie.

I read this book mainly because as a Scot I feel I should have done so already. I always meant to but it was actually a review by Sophia of Page Plucker that got me to finally pick it up. Thank you Sophia, it was a wonderful read. I also read it for the classics challenge which is hosted by Katherine of November's Autumn.  The prompt for this one is a visual tour. As it relies on quotes (and I hate quotes) I am unsure whether I will take part in it or not.

Oh, and you will notice that for once my classic choice does not have a vintage cover. Instead it is by Penguin Essentials and I have to say I quite like it.