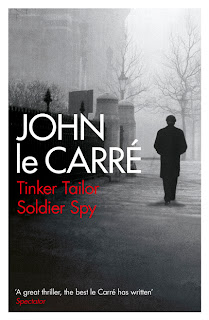 George Smiley was once a spy for a the British. A man who did his job well despite personal problems with his wife and one was trusted by the boss, control. Control became obsessed with flushing out a spy and his obsession ended with a good man being shot. On his downfall George Smiley was taken out with him and now he spends his retired life worrying about his estranged wife and avoiding the people he once worked with. The old life is dragging him back in however. That spy may very well not have been part of Control's imagination after all. Behind the backs of the upper echelons, George is called back to duty to get all the information he can and entrap the traitor once and for all.

I actually read this a good few weeks ago now so I apologise if I am vague on the details. My dad is a huge fan of John Le Carre but I could never quite understand the appeal of spy novels. I can now thankfully. This one was very well done. I got the impression that this isn't the first novel starring George Smiley but I wasn't made to feel that I was missing out on an important tale or details. For me it came across as a stand alone story. Although, we don't get my information on George. He has marital problems which in the end is a big part of the story otherwise I don't think we would have learned about it. George comes across as a man who likes to keep thing close to his chest. Which works since he is investigating on the sly.

The writing is done well too. It draws you into the story and enough is happening to keep you interested. It flashes between present and past scenes in order to give the bigger picture. Nothing to do with the writing but there were times that I found that I wasn't sure what was going on. I don't know if that was deliberate or if it was just me. Despite being lost I was still enjoying it which is new for me. It did all come together at various points and obviously tied up at the end. Glad I picked it up and I am sure I will try more of the authors books another time.

I read this as part of the mixing it up challenge for the crime category. This challenge is organised by Ellie of Musings of a Bookshop Girl. You can see the list of categories here and the list I am doing here. My dad is a huge fan of Le Carre and we have had a few arguments as to whether it should be classed as crime or not. In my bookshop days we shelved them in crime. Plus it has guns, people being shot and countries betrayed. To me that's crime. I will watch the film when I have the chance as it would be interesting to see how it translates onto the big screen.
Posted by KarenSi at 11:14