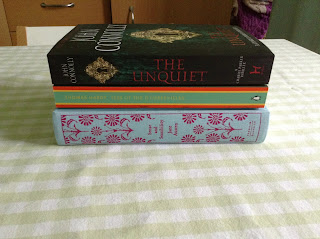 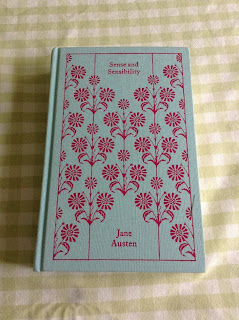 I promise to look through posts for It's Monday later. I would much rather be doing that but I can't put off studying statistics and putting pen to paper any longer (sadly). For now though I thought I would quickly show off some new books I ordered from Waterstones. I really only went online to order John Connolly's The Unquiet. I have been waiting for bookshops to have this in but I can't be bothered waiting anymore. I want to get on with this series. However, it would be rude to order just one book so I ordered a couple of classics too.

I picked up Tess of the d'Urbervilles by Thomas Hardy in the new penguin classic paperback. I get the impression that this is one of those books you either love or hate. A little like marmite. I hate marmite so I am hoping I will love this. I should probably have just got it out the library but with classics I feel I should get my own copy instead.

Lastly I picked up a Penguin Clothbound. I have been wanting to re-read Sense and Sensibility for a while now. I had planned to do it last year but didn't. So this is the year. I was determined if I was going to get my own copy of this book it had to be this edition. It's the magpie in me. I have read all of Jane Austen's books but I don't actually have my own copies (apart from P&P which you saw a few weeks ago) as I borrowed my mum's. I'm not sure she even has them any more. My mum is one of those people who passes on books as soon as she reads them. My dad is the same. My sister and I make up for it for the both of them.
Posted by KarenSi at 13:04