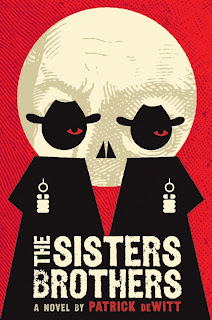 Eli and Charlie Sisters are guns for hire. They mainly work for the Commodore who sends them out when he wants rid of someone. Just back from a job they are being sent out on another. This time they are heading out West, to California during it's gold rush. There they are to kill a prospector who has reportedly stole something from the commodore. Eli isn't happy as his brother Charlie has been put in charge of the job which means less money for him. Plus Eli got left with the useless horse that he is determined not to care for. Along the way they come across many strange characters and manage to make themselves some money. When they finally reach San Francisco they discover that the job isn't all that it seems.

This was one of the books shortlisted for last years Man Booker prize. Although it didn't win (Julian Barnes walked away from that one) it has won other awards. These are the only two out of the nominated books that I have read and I very much enjoyed them both. I'm not sure I could have chosen a winner between these two alone.

That's not why I picked it up. It's a little different from my usual reads. Whilst I do like an historical novel I don't think I have ever read a Western based novel. I was intrigued by it. I quite liked that side of it and it certainly gave a good feel for the era. Riding by horse across America to reach the West, sleeping outside when there is no town nearby and not to mention Eli's visit to the dentist. So much more than that gave it the atmosphere it needed but I would be here all day if I was to list them. Needless to say it was well done and it worked.

As for the characters, Eli is the narrator of the tale (or tales) and as the story grows it's hard to picture him as a killer. You can see why his brother is the one calling the shots as much as Eli might not like that. Charlie in the end is the bad brother who has dragged Eli (unwittingly in Eli's case) into this kind of life. We see Eli with a conscience. He doesn't really like the job and he is the first to question the commodore's motives. We also see through the characters he meets that he just wants a normal life really but loves his brother too much.

In the end it's rather a sweet story of brotherly love. It's not so obvious at the start but by the end of the book I found myself feeling rather emotional for these two brothers.
Posted by KarenSi at 07:16