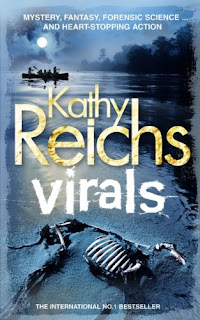 Tory Brennan is the great niece of the famous Tempe Brennan. She's not long in being united with her father, Kit, and finds herself living with him on a deserted research island. She's clever like her aunt and soon has the small group of kids near her age following her lead. Having a soft spot for dogs she frees a wolf being held in the lab and nurses him back to health with some strange side effects for her and her friends. They then discover the remains of a missing girl from the 60's. However, someone is determined that they don't dig any deeper. Even going as far as shooting at them. That doesn't stop Tory though who convinces her friends to continue looking into it. Her aunt wouldn't give up in her shoes.

I like the Tempe Brennan books. They have a lot of things wrong with them in regards to writing but they are entertaining. Even the obvious story lines and coincidences amuse me. This one though managed to irritate me within the first page or so. Almost every thought from Tory's mind is in done in a one word sentence. Probably to highlight the heavy sarcasm but it's still annoyingly frustrating. Plus, while Tory is meant to be an intelligent 14 year old she somehow manages to sound like a genius with great social skills. She has those island boys, who are a few years older, doing exactly what she wants. Yet she can't fit in to her school.

I read in another review before I picked it up that this is really just a set up for a series. It certainly comes across this way. The plot of the cold case is drowned out by the supernatural element which is clearly going to be the theme through the series. Seems a shame that it overshadowed the mystery as I think it would have stood better as a teen crime novel.

The one worded sentences don't go away but eventually I was able to forget about it (or ignore it). I did find myself caught up in the story. A little against my better judgement since I still found the writing style to be annoying. Not the worst book I have ever read but I do think that Reichs would be better sticking to her usual crime books.
Posted by KarenSi at 19:20