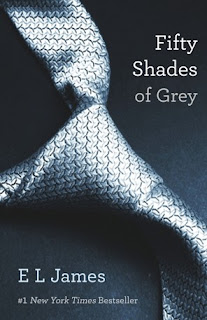 Anastasia Steele is about to graduate from University. Her friend runs the student paper and has managed to get the chance to interview young businessman Christian Grey. She's sick though and Anastasia reluctantly steps in. Ana believes it to have gone badly but there is something about Grey that has her intrigued and then he turns up at her work. Grey wants to spend time with her and Ana wants that too. She just might not be prepared for the kind of thing Grey has in mind.

Believe it or not I didn't know what this was when I picked it up. I actually thought it was some kind of crime novel about a stalker. Honestly, I did. That was a good few months ago before the general public started reading this like they read twilight (which is funny since it was originally written as a twilight fan fiction). Had I known I probably wouldn't have bought it. I don't do romance or erotica novels.

Anyway, this is probably the worst book I have ever read. It's just badly written from page one. It's from the point of view of Ana and we are given every unimportant detail of her life. Yep, it's one of those ones that the author finds hard to not share everything because she is using the voice of the main character. The dialogue is even worse and to be honest the characters have no personality at all. The book badly needs an editor.

The fact that it was originally a twilight fan fiction in no way surprises me. She's a poor girl who believes herself to be plain. He's a rich, enigmatic young man (supposedly enigmatic) who is extremely controlling. Then of course there is the literature thrown into the mix. They both have an obsession for Tess of the D'Urbevilles and are continuously quoting from it and placing each other in certain characters. Oh, and there are a few others in there who are clearly in love with Ana too. I could go on about all the similarities.

In the end the story is really about the sex between the two and whether or not she will submit to him as he tries to have a real relationship. Very boring really and the bad writing isn't amusing enough to keep me going. I will not be reading the others in the series.
Posted by KarenSi at 00:59