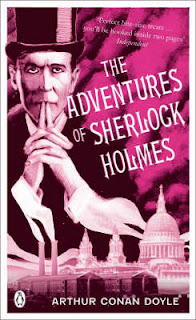 Although now married and moved out from 221b Baker Street Watson still keeps in touch with his old friend Sherlock. In fact many a time he still accompanies his good friend on a case. As before he takes note of these cases for Holmes and so brings together a collection of some of Sherlock's stranger cases. The result is a book of short stories where Sherlock works out the seemingly most impossible of mysteries. He helps a King recover potentially embarrassing pictures. In another he discovers the owner of a hat and a goose that have been left after a struggle. In all Watson wonders how on earth he can possibly solve these riddles but Holmes never fails.

I honestly didn't think it was possible to love Holmes more. Then I read these short stories and I was smitten all over again. Doyle has a talent for short stories. In each he manages to put the detail and characterisations that he put into his longer novels. The only difference being is that the back story is shorter and less intricate. However, not for a second do you feel that you are hard done by. Instead you are left with so many wonderful tales rather than one.

I have to admit that I wondered how poor Watson would continue to manage to accompany Holmes. It's hard to imagine Holmes too without Watson who is after all his only friend. I needn't have worried though as it would seem that Watson's wife is more than happy to be rid of him when Holmes needs him. His profession is dull enough that he quite happily abandons it at every opportunity.

Each of the stories are quite different even if Holmes' deducting is the same. There isn't always a bad guy involved. Just a mystery to be solved which keeps Holmes' away from his drug addiction (although I was amused to find that Opium users disgusted him). I enjoyed every single one of them and was sorry by the time I got to the end of the book. I'm afraid I don't have a favourite to pass on but I was amused by one. The one with the hat which I mentioned in the blurb. From the hat Sherlock is able to deduce the history of the owner without ever having met him. The details are all in the hat. What amused me was that he decided that the hat must belong to a man of great intellect. For it is a large hat to fit a large head. Large head of course are formed because they cover large brains. A product of it's times but it still gave me a chuckle.

If you haven't read any Holmes yet I highly recommend that you do. They make for very entertaining reads.
Posted by KarenSi at 06:56