The Sea, The Sea - Iris Murdoch 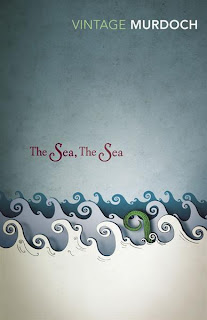 Charles Arrowby has retired from his life in the theater. Once an actor, director and writer he has decided to get away from London and his friends. Now living in a cottage by the sea he begins writing his memoirs. The memoirs are really a reflection of all the people who have been important to him in his life. His mind keeps going back to his first love and so it comes as surprise to him when he discovers that the one who got away is now an old married woman living in the village. He sees this as a sign that they must be together and that he must save her from a marriage she can only regret.

I only just realised that this won the Man Booker Prize back in 1978. Prize winner or not I struggled with this book. Charles Arrowby is a horrible, self-centred, self-absorbed, delusional man. I mean it. He has no good points to him whatsoever. To be honest, I wasn't particularly keen on any of the characters but I especially disliked him. Which of course makes it difficult since the book is meant to be his memoirs after all.

So why did I persevere with it? Well, something would happen after long descriptions of the sea, his disgusting culinary expertise (turned my stomach) and his self-congratulations for being so wonderful. I then had to read on to see what happened next. It was a vicious circle. I would get annoyed eventually, put it down, pick it up again and sucked back in. Once I was 2/3 of the way through any intention to give up on it was gone and I had to see it through. Despite the fact that I disliked most of the book I did like the ending. It had a sad feel to it. Not sure if Arrowby learned from his reality check but I liked the fact that it was there.

I lied when I said there were no characters I liked in the book. Arrowby's cousin James was a fairly likeable character. He was the only one in Arrowby's life who had any common sense or lived in anything like the real world. He was the only one who wasn't so self-absorbed. He tried his best to make his cousin see sense and seemed to genuinely care for him (not that he deserved it).

Arrowby's first love and her family were also more normal than his friends, or more average anyway. They still managed to irritate me mind you and I wished that Arrowby would come to his senses and leave them alone. Of course she didn't help matters but mostly it was Arrowby doing all the pestering. Mind you, without that there would really have been no story at all.

I am glad that I read The Bell first because I very much enjoyed that. Had I read this one it would probably have put me off reading another of her books. I should point out that despite all my complaints about the book it was still very well written. Still, it was a relief to finally finish it. Not sure if this one will be staying in my book collection despite its pretty cover.
Posted by KarenSi at 03:06