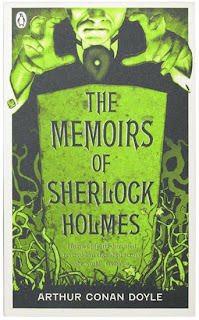 Once again Watson brings together some of his friends famous cases. Much like the last collection each shows Sherlock at his investigative best. Many of these tales are from before Watson's time including Sherlock's first case back in his Oxford days.

These tales run much in the same way as The Adventures of Sherlock Holmes. Not that I was bored with them at all. It was nice coming to this books and a much beloved character after the last book I read. I don't think I will ever grow tired of reading his tales and I have three more books sitting there.

Last time I think I was amused by Sherlock and some of his deductions (notable the hat size indicating intelligence). This time I was amused by Watson. It doesn't matter how many times his friend is able to deduce from the smallest detail it still surprises him. Holmes uses his powers on Watson many times here and still Watson is surprised and occasionally disbelieving until it's explained to him. When will Watson learn to not doubt good old Holmes.

If you notice I attached the League of Extraordinary Gentleman challenge badge on at the start of the post. I know I said that it would be a few books until I got to the Moriarty story but it turns out I was wrong. It appeared at the end of this collection. The story is of course, The Final Solution, and Sherlock comes up against someone who is just as clever as he is. His ultimate nemesis. I've heard so much about Moriarty and how only he could defeat Sherlock that I was actually expecting a larger story. Not to say that it wasn't good. It was but because of it's notoriety I was expecting more.

In terms of the character and a comparison to that of Moriarty in the League of Extraordinary Gentleman I don't think I can compare. The truth is I think he is the character I remember least of all. The truth is that when I picture Moriarty my sci fi geekiness comes out once again. 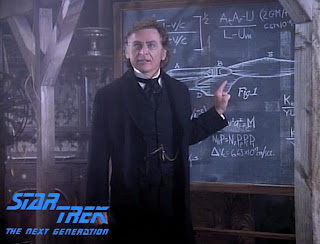 This is the guy I always picture. If you are not a sci fi fan. This Moriarty was accidentally created to be able to defeat Data (an android). Anyway, I remember him rather than the one I am supposed to be comparing him to. Regardless, I liked the original version of Moriarty and I just wished that there were more of him.

This means of course that I have finished this challenge and have already moved to badge on my sidebar to finished challenges. I'll do a wee blurb about it at some point next week. Overall I have enjoyed the challenge which was hosted by Hanna of Booking In Heels. You can see how far along others are getting (or what they think of various characters) here.
Posted by KarenSi at 11:58