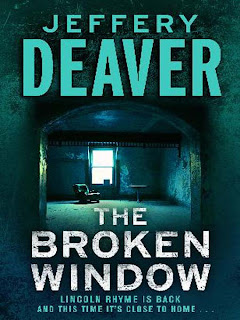 Lincoln has been called in to help his cousin Arthur who has been arrested for murder. He didn't do it. The person who did knew his routine, what he drove and what he bought in order to be able to plant evidence. Looking into it further Rhyme realises that 'the person who knows everything' has done this before and is likely to do it again. Rhyme must uncover the murderer before he starts picking out his team. How can you beat someone who has all information at their fingertips?

I have been on a bit of a crime spurt the last few weeks and this is the fifth crime book I have read in a row. Deaver is the first author that drew me back into the genre and made me think that I had misjudged it. I don't particularly like his stand alone books but I love the Lincoln Rhyme and now the Kathryn Dance series. I love the fact that I can guess most of the book but there is still a big surprise in there somewhere. I think if that bag surprise disappears then I will probably stop reading the books. The social side of the book irritates me at times mainly because I would rather it moved on. Thankfully, I am not alone in that as I discovered recently that it annoys a friend too. I can put up with it though for the rest.

Like most of the later books in the series I start the book feeling vaguely disappointed. I think that this book isn't going to be quite as good as the rest and maybe the series has lost it's edge. Usually something makes me change my mind. In this case the killer was made known to the reader straight away. We had insight into what he was from page one. In past books this is done to confuse the reader and there is usually a twist in there. Not in this case. The killer is exactly as he is portrayed just his identity might come as a surprise although I did guess correctly in the end. The identity theft plot I found a little dull although scary that companies have such detailed information on everyone. I wasn't even half way through the book when I found my mind turning to what I planned on reading next.That soon changed though. It actually got quite exciting when the killer picked up and began targeting Rhyme and his team. It didn't seem like they would be able to beat him.

Overall I still think that it's one of the weaker books in the series but Deaver should be applauded for trying to make it slightly different from the rest. It certainly hasn't put me off reading more.
Posted by KarenSi at 02:27