The Haunting of James Hastings 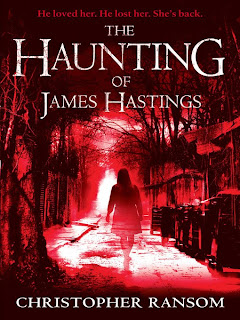 James tragically loses his wife in a hit and run just behind their home. He then quits his job as a stand in for rapper Ghost and hides himself away in his large house. He spends his time in a drunken stupor spying on his neighbours. His only interaction is the occasional drink with neighbour Lucy. A year later he begins to notice strange phone calls at the same time every morning. Sometimes he doesn't feel quite along in his own home. Then a new neighbour moves next door and he begins to wonder if his dead wife is reaching out to him.

Not the worst ghost story I have ever read but not exactly the best either. It didn't exactly give me chills or leave me feeling terrified (the sign of a good ghost story). I didn't mind persevering with it either so it couldn't have been too bad. In all honesty I am not sure what to think about it. I don't think the idea is exactly original. The ghost of a loved one trying to come back through possession. At least it didn't feel like a new idea. I did like the fact that he began to question himself. Was he really Ghost and James was also dead? I think I would have liked it better if there had been more of this through out the book.

On the other hand I hated the character of Ghost. It was quite obvious he was an imitation of Eminem. Don't get me wrong, I don't mind Eminem but the character in the book was irritating as was James when he imitated him. It felt too much like trying to be down with the kids. Had Ghost not been such and obvious Eminem character maybe I wouldn't have minded it quite as much.

The haunting of the house itself seemed quite feeble too. One mention of his clothes being put away as his wife used to do it and then no more references to that. An incident with paintings and then a couple more in the ballroom. That was it. If you want to scare the hell out of me (which is generally quite easy) I need more than that. More atmosphere. Oh, and a ballroom? The house is in an area that was not long ago quite a bad one. Going by his descriptions of the other houses and the fact that someone dumps a sofa in the alley I doubt any of those homes would have a ballroom. Bit hard to believe.

Over all the writing was okay. It did keep my interest long enough to finish. I also like coming away wondering if he had been haunted by his wife or if it was the work of a couple of crazies. I picked this up after a friend had raved and raved about the authors first one. I wish now I had read "Birthing House" first as I doubt very much I will read another of his books.