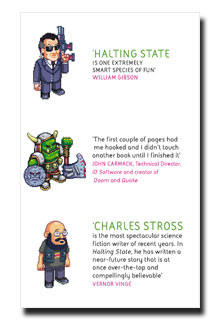 Police are called in to investigate a bank robbery and a potential missing persons. Problem is the bank itself is based in a virtual world. Insurance company send two gamers to investigate potential loss of money. Turns out though there is more to this than meets the eye. Games company is possibly a front to another game Spooks, a role playing game. Spooks turns out not to be a game but the real thing only using your average Joe who thinks it's not real.

I picked this book up because the quirkiness appealed to me. Crimes within games which turn out to be real life spy games. I must admit that I did very much like this aspect of it. I would have enjoyed it more though if it wasn't filled with techno gobbledygook. I have not head for technological terms. I love my technology but only for what it can do. Don't ask me about specs or memory or anything else. Unfortunately this book is filled with technobabble and it was extremely off putting. It's written in a way that you can still understand it and get the story but it's boring. Now I do like my sci fi and have read many a book filled with technology but this book wasn't futuristic enough for me to be okay with not understanding it. Plus it was too much in such a short book.
My only other gripe is that it's written in second person. Admittedly you get used to it eventually so it's only a minor irritation. With this and the technobabble complaint it didn't make for a very enjoyable read. At least not for me. What disappoints me the most that I would have thoroughly enjoyed it if not for these things.

I did like the main characters though. Sue, is a cop that is being thrown into an investigation she has no experience for. Elaine is a RPG player who has a thing for swords and is out of her comfort zone in Edinburgh. Jack is a programmer and gamer who is down on his luck and doesn't quite get why he's been singled out to help an insurance company. All different but likable characters.

So if you like a quirky story and don't mind technology or second person narrative then I do recommend the book. Has put me off trying his other books. I also believe there is a sequel which I won't be reading it.
Posted by KarenSi at 04:13