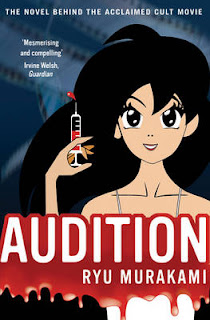 Aoyama has mourned his wife for seven years now. He spent most of that time with his son and throwing himself into large projects. Now his son is almost grown up and he himself has settled. It is then that his son suggests that he marries again. Aoyama decides that his son is right but the problem is he has a very specific idea of what a wife should be and no idea how to find her. His best friend Yoshikawa suggest that they hold auditions for a film with Aoyama's specifics in mind when calling out of people to apply. Thousands apply for this fake role but Aoyama is immediately fascinated by the beautiful Yamasaki Asami. Yoshikawa is unsure of her and there are a few strange things hidden in her past that would make anyone else wary. Aoyama ignores all that as he is already imagining their future life together.

I have read a few by Ryu Murakami and whilst I have enjoyed them all this one has to be the best to date. The build up alone was fantastic. The vast majority of the book is spent planning the auditions, Aoyama's day dreams and the wooing of Yamasaki Asami. The warnings through out are actually fairly minor (for the most part) and she easily explains them away. We the reader are aware that something is going to happen. This build up isn't for nothing but I don't think Aoyama can be blamed for being unaware until it is too late. Yes his best friend tried to warn him but it was just a feeling and some rumours about people in her past.

The climax of the story only occurs over the last few pages and the wait is well worth it. By this point Aoyama knows that there is something wrong with Yamasaki but he still is unprepared for what happens next. I did know what was going to happen as my friend had read the book before me (and told me quite a bit of it). I am sure though that most readers would guess what was going to happen though. Having said that I still got caught up in the story and found myself riveted to those few pages.

I'm not sure I liked Aoyama as a character. He is harmless enough but is more than a little sexist and patronising. Although I doubt he means to be. He is probably more a product of his generation. The fact that he believed that there were too few people out there good enough for him and so he had to hold auditions for these women to (unknowingly) prove their worth left a bad taste in my mouth. Of course it wasn't his idea but he still went along with it and any guilt he felt was really only in the possibility that it might cause his mission to fail. Then there was the added fact that all his imaginings of Yamasaki in the future involved her in a domestic setting whilst he sat relaxing and watching. It annoyed me a little but not enough that I didn't feel sorry for him.

All of Murakami's books have their fair share of blood and violence. This one was no different but it occurred during the climax of the story and so was more effective as a result. I would say that if you have a weak stomach then this maybe isn't for you.
Posted by KarenSi at 05:23