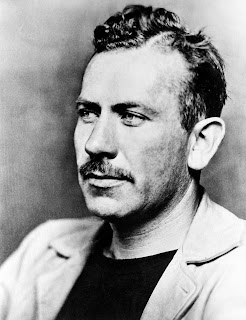 Every month Katherine, who is running the classics challenge, is posting a prompt. We don't have to answer them all but it is suggested that we answer at least a few of them. It turns the challenge into more of a blog hop. Makes it more fun too. This months prompt is about the author.

The book I chose for the first month is John Steinbeck's "The Acts of King Arthur and his Noble Knights". This is probably his least well known book but I had to read it as soon as I heard that it existed.

Steinbeck was born in California in 1902. His place of birth can easily be recognised from some of his more famous books. You can see his handwriting here; 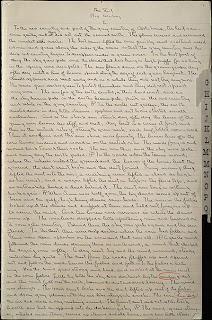 He is probably more famous for Of Mice and Men, The Grapes of Wrath and, my personal favourite, East of Eden. He attended Stanford University in 1919 and was there off and on until 1925. He had taken many courses in writing and literature but didn't actually complete a degree. He had many jobs in New York before selling his first story. One of those jobs included journalist. In 1962 he won the Nobel Prize for literature. He also won the Pulitzer Prize for The Grapes of Wrath.

For me Steinbecks strength is in his characters. They are among the most memorable I have come across. He manages to make you feel such sympathy with them even when they go down the wrong path. The only character I was never able to sympathise with was that of Cathy Ames from East of Eden. She was one of the most horrible people I have ever seen in print. One of those that you love to hate and hope from page one that she gets what's coming to her. Whilst I enjoyed his shorter books it's his larger novels I love best as they draw you in from the first page and you never want them to end. Steinbeck loved to try new things and so his books cover many things such as his California books, family sagas, war, travel. He even tried his hand at film and had an interest in marine biology. I think he would have been a fascinating person to talk to.

According to the introduction, The Acts of King Arthur was written for his sons. Steinbeck says that he struggled with learning to read and feels the pain when watching others learning. He believes it's one of the more difficult things children learn to do. He resented books as a result until his aunt bought him a copy of Thomas Malory's Le Morte d'Arthur. Despite the archaic language he loved it and was a fan of those tales from that day on. He decided to re-write the stories for his son. He wanted them to enjoy them as much as he did.

I know little of what Steinbeck's peers thought about the book I'm afraid. I get the impression that it is thought highly of. He manages to keep the tone of the stories whilst fleshing them out. Sadly he never finished it and what he did finish was published only after his death. Whilst winning prizes is not the be all I think he must have been highly thought of to have won two highly prestigious prizes.

This challenge was set by Katherine of November Autumn. To see some of the other authors highlighted those taking part just click here.

Edit - I have since finished the book and I have posted my review here.

Oh, and if you want the chance to win a copy of The Eyre Affair, a book which highlights many fantastic classics, just leave a comment here.
Posted by KarenSi at 17:10