A Discovery Of Witches - Deborah Harkness 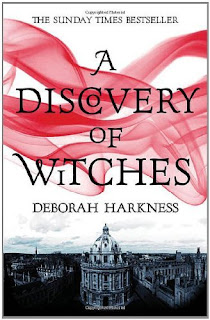 Diana Bishop has spent her entire life ignoring the fact that she is a witch despite the fact that she is the last in a long line of a famous family. Her parents were killed despite being powerful and so Diana just wants to be human. She focuses instead on her studies and is now a respectable historian taking time away from teaching at Yale to do some research in Oxford. When she calls for a manuscript to help with her research she ignores the fact that it is clearly magical and sends it back. All of a sudden she has the attention of witches, demons and vampires and not the good kind. Only one vampire is standing between her and the unwanted attention and to make matters worse her powers have decided to come out and play. She has to find out why only she can call the manuscript and how to control her powers before it's too late.

This book seemed to be focusing on the research and historical side of the story at first. This type of writing has always appealed to me (one of the reasons why I loved The Historian). Sadly it didn't stay focused on that. All of a sudden it became about a forbidden romance between a witch and a vampire. Diana is unaware that it is forbidden for creatures to be romantically involved and by the time she finds out it's too late. The only way to prevent ramifications is for Diana to become a vampire herself. Thankfully it didn't really go the whole Twilight route as neither Matthew or Diana want that. However, there were plenty of times Twilight was brought to mind. Mainly because of Matthew's protectiveness of Diana and his old fashioned attitude to love. Also the fact that Diana lets him a lot of the time. Not always. She started off as a fairly strong character but seemed to become more and more reliant on Matthew as time went on. Occasionally she would show some of her original strength though.

There were far too many parts of this book which were completely unnecessary. Detailed descriptions of almost every meal for one thing. I am sure that there were aspects of Diana's time in France which could have been cut down and no difference would have been made to the story or the connection the reader makes to the character. I was also disappointed at how much time Diana spent away from Oxford. I enjoyed the time there better than in France and New York.

Having said all that I did have fun reading the book. As I said I liked the historical aspect and that didn't completely disappear. The whole story didn't just revolve around Diana and Matthew and their forbidden love. It was also about the next step in the creatures evolution. Diana was a strong character for most of the book and whilst I did feel she changed I still like her for the most part. I also like where the story is going. The second book (which comes out this year) is set in the past and I believe a few famous historical characters pop up. I'm looking forward to that. An easy start to the New Year.