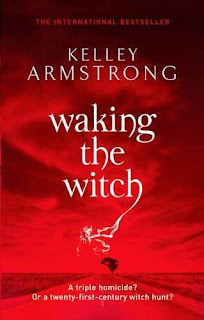 Little Savannah is all grown up now and is determined to prove that she can fly solo on an investigation. With Paige and Lucas on holiday she takes the opportunity to do just that. Three women have been murdered in a nearby small town and there are some hints that the supernatural is involved. Savannah believes her biggest obstacle will be overcoming her inability to empathise of hold back her impatience and so she swoops in straight away. Turns out someone knows exactly who she is and Savannah is in danger of becoming a victim herself.

This is the 11th book in the series (which I gather is ending soon). I have to say that I have been disappointed with the last few instalments of the series. I was especially disappointed with "Frostbitten" because it also involved everyones favourite pack and yet didn't hold a candle to the earlier books. As a result I put off reading this one until it was released in paperback and even then it took me another 6 months. It also meant that my expectations of it were lowered. Having said that I was actually pleasantly surprised when I did pick it up. It was nice once again to read about characters I know so well even if there was little mention of most of the others.

Like all of Armstrong's female characters Savannah is strong, feisty and out to prove herself to everyone. She first appeared in "Stolen", the second book, as a troubled 12 year old. She is now 21 and still troubled but with a little more maturity. I liked her character back then and there is still enough of the rebel in her to see recognise her. Basically she is grown up but Armstrong has still been able to keep the fundamentals of her character which I liked. She is a fun character to watch.

Although the series has been written for adults this one felt more like a YA which I know the author has been writing more of recently. I don't think it was Savannah's young age or first steps into independence that gave it that feel. It just lacked the complexity of the first few books. The earlier ones had more detailed story lines than this and so it made for a very quick read. I could have done it in a day if I wasn't reading other things at the same time. In fact this book leads directly to the next as there are still unanswered questions and  it involves some of the same people. I think early on she would have done this as one novel rather than two. That doesn't mean I didn't enjoy it because I did. I just think it's maybe a sign that the series is winding down.

Last criticism and it's mainly due to my hunger for more. I was a little disappointed at how little the other characters in the series were mentioned. We usually get snippets of how each of them are doing even if they are in no way prominent in the book. This didn't really happen much. We heard from Jaime but only as a means of research. We heard from Paige and Lucas but only because Savannah had to check in with them. And of course we heard from Adam who was the only one who had more than a couple of lines. The others were lucky if they got a mention. As I said though that's all down to me and my nosiness. I know if Savannah was real she would be annoyed if the others stole her limelight. I just hope the last book of the series will have more of everyone.

A good read which has made me look forward to the last two books in the series.
Posted by KarenSi at 02:09