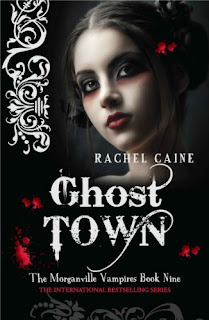 Life for Claire has reached a level of normalcy. As normal as she can considering she is living in a town ruled by vampires. Her parents have finally accepted her living with Shane, Eve and Michael. Things are going great with Shane. She's no longer afraid of Monica. Plus she is enjoying her work with Myrnin even if he is crazy and wants to put her brain in a jar. The town itself is uneasy and the relationship between vampire and human is volatile. So volatile that there are even factions among the vampires. The towns only hope is for Claire and Myrnin to fix the machine that keeps everything peaceful. However there is something wrong with it. Vampires are going crazy and humans are forgetting who they are. It's up to Claire to set it right before she forgets her life too.

If you haven't read any of these books then it's probably best that you don't read this review. This one is book 9 and it will be hard to review it without spoiling something.

It's been quite a while since I read one of these and it was nice to go back to. The stories aren't as strong as what they were in the beginning though. If anything the plot line has gotten a little crazy and has done so for the last few books. A machine that controls the town that originally contained the brain of a vampire. It's a bit hard to take and yet I keep reading. I love the ridiculous story lines and yet Caine doesn't make them seem so ridiculous.

The relationship between Claire and her friends is a little annoying now. All sugar and sweet. Even when they all don't remember each other that sweetness is still there. It's not them that I read them for. I read them for Myrnin. The epitome of the crazy scientist with a huge dose of vampire thrown in. Completely unpredictable. At one moment he is a sweet, almost child-like, old man who loves to wear vampire bunny slippers. The next he is one scary vampire who forgets the people around him. I love him and I hope that any future books contain lots of him.

The book starts with Claire finding a history book about the life of the founder, Amilie. I thought this was going to be a major plot line as we were reminded of the book several times. Instead it had very little importance and Claire used facts from it to prove to Amilie she was who she said she was. I hate it when books do that. Unless the book comes up in another story it was really pointless and Claire could have used other facts. Which didn't work anyway. It also wasn't explained how Amilie managed to regain her memory when everyone couldn't

Anyways, despite my criticism I still enjoyed it. I will probably go on to read the next one but there is no telling when that will be.
Posted by KarenSi at 00:44