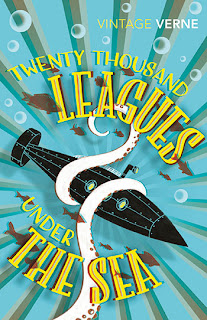 A creature has been terrorizing the sea. Larger than any other Whale it has been spotted all over the Earths oceans and has even been responsible of damaging one ship. Professor Aronnax is an expert in all things natural and so he is asked to go on a hunting expedition along with his servant and whaling expert. Aronnax jumps at the chance but it soon becomes clear that this creature is in fact a submarine captained by the mysterious Captain Nemo. Aronnax and two others become prisoners of Captain Nemo for fear that they will reveal his secret. Whilst under his key they see a great many wonders and travel to areas once unexplored by man.

First of all apologies for this late review. I read this over a week ago but essays have gotten in the way of my blogging (and my reading). Secondly, how amazing is this cover. This is now probably one of my favourites by vintage. Not only does it look amazing but it comes with 3D glasses. Yep, the cover is in 3D. If I had remembered to take part in the top ten favourite covers a few weeks ago this would have been at the top of the list.

As for the book I did enjoy it. I was looking forward to it because I had loved 80 days so much. Just like that this is another great adventure story. Possibly not in the same league but still a good one. With twenty thousand leagues the tension is in the fact that Aronnax and friends are captives (although very well looked after). They also manage to get themselves into one or two scrapes whilst exploring. The visit to the South Pole was probably the more tense as they battled ice. It was very different from 80 days though in that it was so descriptive of all the wonders seen. The only thing it did better I think. The only thing that I was disappointed in wasn't the fault of the book but the blurb at the back. It described a visit to Atlantis but that didn't happen. I was looking forward to it.

Since I was reading this for a challenge I was paying close attention to one character in particular, Captain Nemo. Whilst he is a main character he wasn't actually the narrator. We learn very little about the mysterious Captain other than the small pieces Aronnax manages to get out of him. He is a man who is fed up with life, or at least with humans and they way we treat each other. He is taking himself outside of society which has hurt him and plans to spend the rest of his days exploring the Seas. He contradicts himself a little though in that he wants to help the underdog. He just doesn't want anyone to know that he is doing it. Despite holding Aronnax and the others captive and some of his actions at the end I did actually like Nemo.

This was read for the League of Extraordinary Gentlemen Challenge hosted by Hanna of Booking In Heels. You can see posts by others here. As I said Captain Nemo was the character for this one. I don't remember him much in the film other than he was one of the quieter characters which fits in with Verne's original portrayal of him.
Posted by KarenSi at 06:36