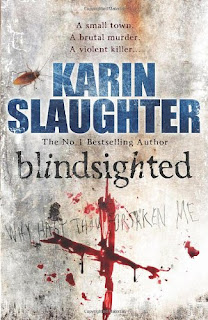 Sara Linton is the towns pediatrician and coroner. Needless to say she leads a busy life and most of that is spent avoiding ex husband, Jeffrey Tolliver, who happens to be the towns chief of police. She is late for lunch with her sister and after placating her she heads to the bathroom. There she finds Sibyl Adams, a local college professor, on the toilet bleeding to death from deep knife wounds. Poor Sibyl doesn't survive and when a few days later another girl disappears Sara and Jeffrey believe they may have a serial killer on their hands.

So before Christmas I read the last book in the Grant County series (mistakenly). I enjoyed it and was glad that I had read the last one because of the ending. So this is me now starting at the beginning. I have to say that after the first few pages I had to double check that this was actually the first. Thanks to reading the last book first I got the impression that the divorce of Sara and Jeffrey occurred during the series. Actually they were divorced two years at the start. That's what I get for being smart I guess.

I said in the last review that I didn't particularly like Sara. I still don't. Despite the fact that she tries not to be condescending she still is and that's not exactly a likeable trait in a character. Although possibly a trait Doctors are well known for (I'm lucky that I have yet to come across that myself). She also is still very cold. There are reasons for it which we learn about during the book. However, in the last book she was cold too so I don't think she changes much through out the series. I have my doubts as to whether she will grow on me. I don't completely dislike her though and I do like her ex, Jeffrey so there are enough good main characters in there to keep me going. Besides, life would be boring if I did like all the characters.

It was well written too. Probably one of the better written crime books I have read. Despite all the background information we are given we are also kept going by the investigation which we discover is somehow linked to Sara's past. Enough is going on with that to make it an exciting read. Especially with events that occur about half way through the book. Most authors, I think, would leave this particular incident to somewhere near the end for the main character to come along and save the day not long after. It was refreshing that it wasn't done this way. There was also no way I would have guessed who the culprit was before I was supposed to. I don't think there were any real hints other than one which wasn't really enough for me to guess. It's always nice to be surprised so I see that as a good thing.
Posted by KarenSi at 05:22