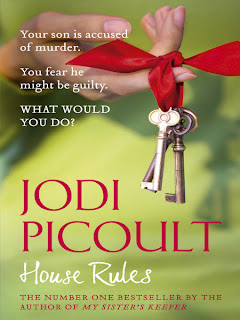 Jacob Hunt is 18, very intelligent, with a family who loves him and has Aspergers Syndrome. His entire life revolves around routine and his family trying to ensure that they stick too it. All to prevent him from having a breakdown and so that he can lead a normal life. His intelligence is great almost to the point of genius and he focuses that on various subjects. His current obsession though is forensics and his mother does what she can to encourage him. However, when a family friend turns up dead Jacob's behaviour is thought to be that of guilt to those who are on the outside looking in. His family must do what they can to prove them innocence as they become social pariahs and even they have their doubts as to Jacob's innocence.

I haven't read a Picoult in years and in all honesty I didn't expect to be reading another after hating the first one. A friend though, suggested this when I mentioned I was going to be spending a couple of weeks looking at mental health. Otherwise I wouldn't have given the author another chance.

There were a few aspects of the book that I liked. Mainly the fact that it covered so many voices. If I remember correctly the one book I had read by Picoult was the same. However, in this one it gave rise to interesting perspectives. The reader got to see how families cope when a child has Aspergers and how siblings see it as their parents attention mainly revolves round the child with the syndrome. It also showed how those with no previous understanding of it might see it. It showed the impatience those who don't understand might feel and how odd the behaviour of those with Aspergers might seen. More importantly the book gave Jacob a voice. We saw how the world looked to him and how he viewed his own disorder (which he didn't view as a disability or disorder).

For that reason I did enjoy it for the most part. It was easy to read and the characters were easy to like. Although to be honest Jacob is the only one in there who I would say is memorable. The mystery aspect of the book was a little predictable although I probably could have lived with that. The book itself badly needed editing. It was so repetitive that I was tempted to give up about half way. There was no need for half of the examples or asides in there. It felt like it was trying to push home an idea that it had succeeded in doing about 100 pages before. It definitely could have used some tightening and tidying making it a better read in half the pages.

It hasn't changed my mind about reading more of the authors books. There would have to be a reason similar to me picking up this one to try another.
Posted by KarenSi at 09:01