The Sense of Ending - Julian Barnes 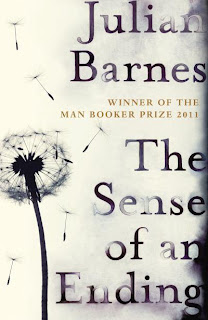 Tom Webster is retired and spends his days running a hospital library and having lunch with his ex wife. Out of the blue he receives a letter from a lawyer. It has been sent on behalf of someone he had half forgotten about and never expected to hear from again. This letter has him thinking back to his past starting with his school days when his friends and himself befriended new boy Adrian Finn. This letter makes him think that how he saw those times might have been different from the way others saw it.

This is the book I got out the library on Wednesday and read it in two hours. Somehow it seems funny that a 150 page book could win the Booker prize, especially when you compare it to Hilary Mantel's Wolf Hall. Not that you can since they are both completely different. I don't think I read any of the other books in the short list so I can't say whether I think it deserves the prize or not. I did however, quite like it. It was a simple read and kept me entertained for a couple of hours.

It starts off with the narrator reflecting back to his school boy days and meeting Adrian. I found this section to be quite funny. These young boys are clearly intelligent but so full of their self importance. It would be hard to take if the narrator wasn't poking fun at himself and his friends as the tried to be different from their parents. Despite how short the book is you do get a sense of who the narrator is, or at least who he thinks he is. I quite liked him. He knew his own faults although perhaps not all of his faults but then we don't always like to review faults within ourselves. In the end he just wanted a quiet life and that was what he got.

I even liked him in his university days although I think this is where a lot of reviewers dislike him and this is where the main events really take place. He meets girlfriend Veronica who sounds like an absolute delight. However, all the things he talks about I put down to youth, including a rather cutting letter which Tom wrote in a moment of heat and upset. It all leads to Tom's present day mystery but sadly Veronica isn't telling. Which I found so completely frustrating. It's that old line "If you don't know then I'm not going to tell you". People aren't mind readers so I think it's understandable that Tom doesn't get it and so begins investigating his past.

I liked the reflection over the years. It was very easy to read as was present Tom's attempt to unravel the mystery. I don't think the ending quite answered everything though. At least not to my liking. We know what happened but we don't know how it happened. There is a very small hint but I am nosy and I wanted all the details.

As I said I quite liked it. Nothing to get excited about but it was a good read despite the fact that Veronica irritated me no end. I can see myself reading more by the author at some point which I think is a good sign.

Oh, one last thing on the small book subject. I'm not saying that a shorter book can't win prizes. It's just unusual these days for modern fiction writers to write a book in under 200 pages. It makes a nice change and I think that it takes talent to be able to do that too.
Posted by KarenSi at 15:42