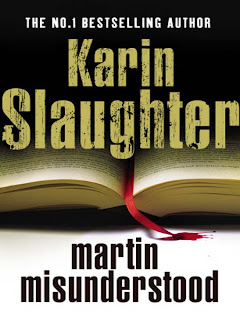 Martin Reed is one of life's loosers. He was a nerd at school and picked on as a result. He is now 36 and still lives with his mum. He thought that things would change since he is now an accountant but alas no. The popular people are still there ignoring him or picking on him. His office is next to the toilets and his assistant bosses him around. Still, he has his crime books and he loves them. One day he goes into work to discover that one of his bullies has been mowed down in the street and all the fingers are pointing at Martin. Martin didn't do it but he can't actually tell anyone where he was that night.

Another library book I read in a couple of hours. This one was actually picked out by my mum but I ended up reading it first. It's supposed to be a funny read but to be honest I was a little bored by it and didn't find it funny at all. The only good thing about it was the constant references to other crime books and shows generally made by Martin.

Despite that I did actually feel sorry for Martin. For a looser he is actually quite eloquent in his speech but then that's probably further fodder for the bullies. Most of the time though I found the other characters rather annoying. Such as the detective on the case, Martin's mother and his assistant. Then of course Martin doesn't really help himself in the end all because he finally is someone.

I have read one other book by the author before and I liked it. In fact I am reading another just now. This one I think she must have wrote just for a bit of fun. We aren't meant to take it seriously. I just didn't enjoy it all that much.
Posted by KarenSi at 02:57