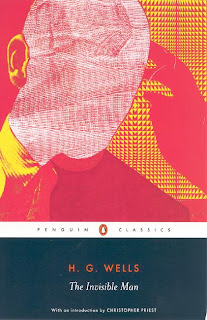 A small village in England is host to a rather strange man. A scientist who spends his days locked up with his experiments. No one really knows what he looks like because of his strange get up. However, they do know that he dislikes company, their curiosity and has a bit of a temper if things don't seem to go his way. This they put up with as he has the money to pay his way and doesn't barter over expenses. A rarity in those times. However, when the money runs out so does their patience and the confront the man. The result is that he loses his temper and begins terrorising the village as his secret is revealed. He is invisible and how do you fight an invisible man?

In all honesty H. G. Wells is hit or miss with me. I have read some of his books I have liked and some I have found extremely boring. Thankfully I loved this one. It is now one of my favourites by Wells which surprised me a little. I really didn't expect it to surpass The War Of The Worlds but it did.

It reminded me a little of Jekyll and Hyde. An experiment gone wrong and a mans determination to change back. Then of course he begins to terrorise the villagers. However, this one is far more exciting as it leads to a grand chase through out the country side and the story builds up pace right to the end. The story also differs in that I had absolutely no sympathy for this man. When you hear his back story near the end of the book I don't think he was every likeable at all. His ego pushed him to these experiments and then he wanted to use the results for evil deeds.

It has it's moments of humour too. Particularly in the shape of the tramp who is minding his own business when the Invisible Man convinces him to help. I loved this character and he certainly gave more depth to the story.

I read this book as part of the League of Extraordinary Gentleman challenge hosted by Hanna of Booking In Heels. As Hanna mentioned in her set up post for this challenge the film couldn't get the right to use the real Invisible Man so instead the character had stolen the potion from the original. I don't remember much about him other than I think he was one of the good guys. Unlike the orignal this one was a bit of a jack the lad. The difference is great but forgivable since they aren't meant to be the same people.

I only have one more book in this challenge to read which is the last Sherlock Holmes featuring Moriarty (Moriarty being the character featured in the film). I want to read all of these books in order so my next and last post for this challenge will be a few months in coming but it will be here before the year is out. If you want to see what others have said about this challenge and it's characters you can do so here.
Posted by KarenSi at 06:28