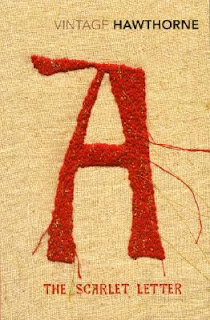 Hester Prynne has been found guilty of adultery. The evidence is her little Pearl who was born despite Hester's husband being missing two years. The fact that her husband has been missing means a more lenient punishment. Instead of facing death she has to forever wear a large red letter A embroidered by her own hands. Her refusal to tell who the father is as well as the red letter has her shunned from society. Only when her embroidery skills are needed is she reluctantly approached by the women of the village.

The truth behind my prolonged absence and my pile up of awaiting reviews is that this was the next one and I had (have) a mental block. Nothing I say can do it justice. Quite a bit of what I want to say will result in major spoilers. As in you would know the entirety of the story before you read it. So I apologise if this review is far from my best.

What attracted me to this book is the fact that it is set during the famous witch trials although that is not what the book is about. There is some mention of them however. In fact one of the minor characters of the book believes herself to be a witch and believes that little Pearl has the same master. It turns out that an ancestor of Hawthorne himself had a role to play in the witch trials which possibly explains the setting of the book.

I loved the character of Hester Prynne. A beautiful lady of society from London who is unhappy in her marriage. That's not to say this is why she committed adultry but we get a good view of her before from flashes she has of herself in the past. Now she just wants to quietly live with as much dignity as she can muster considering her circumstances. Of course Pearl herself takes some of that dignity away at times and is a trying child. In the book it is hinted that her nature could readily turn to evil if she chose but today we can easily see that she can't help but notice her isolation along with her mothers. Any child would react to that. Despite this Hester has a lot of patience and love for Pearl. She also stands strong in her refusal to voice out who the father is. You can't help but admire her for that although you don't find out her reasons until later on. Call me selfish but I would have been shouting out his name and pointing fingers since he was too coward to stand beside her in the first place.

I really don't know what else to say about the book out of fear of spoiling it. It was one of those books which you felt tied to emotionally from page one. You couldn't help but feel Hester's stubbornness and frustrations at being so isolated. Her worries for her daughter. Plus her terror on behalf of Pearl's father. It's one of those books that will stay with you a long time.
Posted by KarenSi at 23:17