Be My Enemy - Christopher Brookmyre 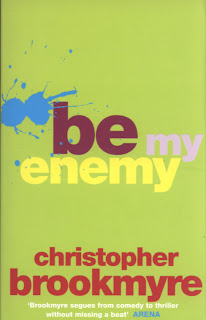 Jack Parlabane is a Glasgwegian journalist with a reputation for causing trouble. However, it's his reputation for cynisim that gets him his latest reporting job. He has been invited to take part in a corporate team building exercise at a secluded hotel near Inverness. The company who are organising this hope that if they can concince the cynical Jack Parlabane of their product then it will give their company the kick start they need. Jack agrees to go along and brings his photographer friend who just happened to be a British spy in a previous life. Along with Jack and Vale a group of others ranging from different walks of life have also been invited. Unknown to them though there is a reason this group has been brought together. Although they won't find out that reason until they are already fighting for their lives.

This is only me second Brookmyre book. I bought it years ago but always meant to read the previous books in the series first. I managed one (which I did enjoy). I decided to pick it up because of my determination to get through my tbr pile and this would be sitting there for another 5 years if I waited until I read the others. I'm glad I didn't wait as I think had I gotten into the series I would have been sadly disappointed. This just didn't live up to the first book in the series. Thankfully I had been warned that after the first three books the series goes downhill so my expectations weren't that high to begin with.

Reading it I didn't feel that I was missing out on too much from not reading the others. I remembered a few of the recurring characters in Parlabane's life from book one and anything else in his life was briefly mentioned and didn't have much in the way to do with the plot. On the other hand it just wasn't as funny as that first book. I remember laughing out loud from the first line. With this one, while Parlabane had his amusing moments, there was nothing to make me laugh out loud. Parlabane's attempt at humour came across as 'trying too hard'.

The plot itself I did enjoy although from what I hear he had done this sort of thing before but with an oil rig. Another reason for me to be glad I stopped waiting. The fun didn't start until half way through the book which was a little annoying but I could sort of understand it. It gave us background information to each of the characters involved which turned out to be important in the end. There are hints as to why each of the characters were invited in this first half. Once I got to the second half I got right into it and I wasn't so bothered that it wasn't as funny. It did end a little quickly but that's the price you pay when all the action is stored up for one half of the book.

I do still want to read his earlier books. This hasn't put me off and in truth I did like it. It just wasn't to the standard of that first book.
Posted by KarenSi at 06:45