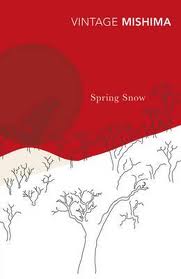 It's 1914 and Kioyaki Matsugae is the privileged son of a family who are descended from Samurai. They have advanced from that position and are making their way up the ladder of aristocracy. As a result Kioyaki has more privelege than most of his school chums. He is granted an automatic place amongst the aristocracy regardless of how he does at school. Which is just as well because he spends his time contemplating his life and then chasing his old friend Satoko Ayakura. Satoko is the daughter of a family who has a long history among the aristocracy but have fallen on tough times. They rely heavily on the Matsugae family and as a thank you they teach Kioyaki the artistocratic way. Kiyoaki has therefore spent a lot of time with Satoko and doesn't realise until it's too late that she is deeply in love with him.

If this sounds like the story of a spoiled brat who doesn't realise what he wants until it's too late you would be correct. Kiyoaki is not only privileged he is beautiful too and an enigma to his own family. He is spoiled and hard to like. Only his best friend Honda seems to like him and even he loses his patience with him at times. He is vain and fickle and little realises or appreciates the hard work his family have put in to get where they are. Then there is his views on Satoko. She is an irritant to him as her behaviour and words confuse him. He doesn't realise all her words are to show how much she cares for him but instead believes she is trying to be difficult. It's only when he can no longer have her that the little light in his mind clicks. He realises he loves her too and like the spoiled child he is goes after what he can't have.

I have little doubt that I am not endearing you to the story. Every word of this is true and yet you will want to read on. If only because of the beautiful writing. Japanese writers seem to have a talent just to make their words flow and Mishima is no exception. It makes the book a delight to read and you don't really mind too much that Kioyaki is a spoiled brat. His friend Honda who gets a voice in the book more than makes up for it. If anything he is everything Kioyaki should be. His family isn't quite as privileged and he knows hard they work. He works hard too and is determined to get everything he can out of his education. He knows his friends faults and watches him as though he is a study on human nature. Yet he still loves his friend and helps him when Kiyoaki finally opens up to him about Satoko.

The Siam Princes are also a pleasant contrast to Kiyoaki. They truly come across as innocents as they are visiting Japan and have no choice but to see Japan through the eyes of Kiyoaki. At least what Kiyoaki chooses to reveal to them. They cling to him even when the have to move to the school dormitories. It's their openness as well as their innocence that makes them such a contrast because really for much of the story Kiyoaki is an innocent too. A young boy who doesn't know he is in love.

If I say more about the story I will probably spoil it. It's the first book in a series of four and I know a little how each of them are connected thanks to my classic loving friend. It was that interesting premise alone that got me reading it and I definitely want to read the others. I am not exagerating when I say that Mishima writes beautifully.

Plus once again, how lovely is the vintage cover? Even if my friend hadn't sold me on it. Had I seen this cover I would have immediately picked it up.
Posted by KarenSi at 22:39