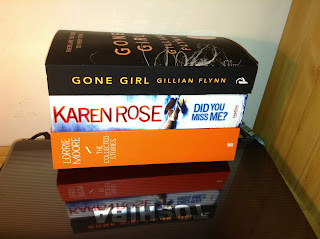 Feels a bit cheeky to be doing an overview a third of the way into the new month. Going to do it anyway as you can see. I need to get back onto my blogging routine.

It's not the blogging I have had a problem with (although I do have a couple of books to review). It's the reading, or rather my less than inspirational book pile. There is nothing in it that is calling out to me and this was shown by the fact that I read only four books in January. One of those was a novella too. My pitiful four books from last month (of which I had the first two weeks off) were;

1. Full Dark, No Stars - Stephen King
2. The Hundred-Year-Old-Man Who Climbed Out A Window and Disappeared - Jonas Jonasson
3. The Mist - Stephen King
4. Be My Enemy - Christopher Brookmyre.

I also gave up on an 800 page tomb, The Crimson Petal and the White by Michel Faber. After a promising start I quickly became bored and the thought of reading this book put me off reading at all. Eventually I was brave enough to call it quits and pick up something I actually wanted to read. Other than that I did actually enjoy the books I read and the Jonasson one is alread a firm favourite (as I mentioned in my review). It's also the only one that didn't come off my book pile.

As for the rest of this month I bought three books in the hopes of gaining an interest in reading again. One was a book I have been wanting to read for years, another was a whim and the last was a recommendation. I am starting with the recommendation which is the Gone Girl by Gillian Flynn. Hopefully it will get me excited about reading again.

I also wanted to start up my classic a month again and I did pick up Spring Snow by Yukio Mishima but I have only just finished it. So there goes my one a month. Although it was a good classic for the first of 2013. I've whittled down my reading pile again so hopefully I will get a few of those finished too. I am also hoping to spend a bit of time doing the blog rounds. As I haven't been reading as much I've felt too guilty going to see what others are reading. Looking forward to it now though. Lastly, my plan is to catch up on my goodreads challenge. Until today I was 4 books behind.

Hope everyone had a more inspirational January than I did.
Posted by KarenSi at 13:00

Email ThisBlogThis!Share to TwitterShare to FacebookShare to Pinterest
Labels: book purchases, Month Ahead, Month Round Up