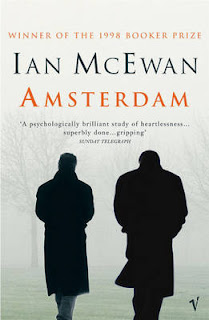 After a prolonged illness Molly Lane has passed away. Many of her friends have come along to the funeral to pay their respects much to the chagrin of her husband as a fair few were former lovers. Foreign secretary Julian Garmony, composer Clive Linley and editor Vernon Halliday are three such guests. Clive and Vernon had actually become friends due to their connection to Molly Lane and their mutual dislike of Garmony. After the funeral Vernon comes across the opportunity to bring down right winger Garmony and gets his friend involved. However, this hatred and plan for revenge comes crashing down around them.

I forgot this was a Man Booker winner. It wasn't why I picked it up although I have been curious about his winning book. It was more I was in the mood to read one of his books and this was the only one the library had. Having read it I do still think that Atonement is the superior even though that was only short listed.

The characters Clive and Vernon are unlikely friends. They really don't have all that much in common. Clive lives in a world of music and that's all he really cares about. His social circle in the past have always revolved around music and the arts. Molly was a big part of that too and it was really only through her that Vernon was brought into Clive's world. I don't really understand how the two connected considering they have no real respect for each other. Vernon on the other hand is a newspaper editor. Has worked for the papers for years and is well respected in his field.

At this point their hatred of Garmony seems to be their only connection. Especially since Molly is now dead. Garmony is a right winger. Not all right wingers are bad but this one seems to go to the extreme. Or at least he would if he could and it looks like he is heading to be in that position. This is why Vernon gets involved and it just so happens that Molly's husband is able to help. A lot of this hatred and vindictiveness though is petty rather than for political reasons and you do have to wonder what Molly seen in each of them (and this includes her husband). Was she just attracted to their talent? As much as each of the characters repulsed me in some way I had to read on and see what would happen. This seems to be typical of McEwan. The characters always have a darker side, usually a selfish and petty one. In this case all of them.

The book was very well written. Points of view from each of the two men which gave insight into each of their worlds and was important to the ending. As for Amsterdam. Well, it isn't too clear why the book was given that title until the end when all was revealed. A great book and a great ending.
Posted by KarenSi at 02:05