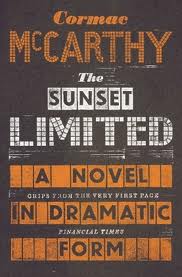 Mr White and Mr Black are in the home of Mr Black. MR Black has just saved Mr White from jumping in front of The Sunset Limited. He refuses to let him leave until he can gain some understanding as to why he might do that. He also wants to convince Mr White that there is more out there and more to life and that someone cares for him. Mr Black found God when he was in prison and about to die. He doesn't have much in life other than the four walls around him. Mr White on the other hand has done fairly well for himself. He is a professor but also an atheist.

When I picked this up in the library I was unaware that McCarthy had written any plays. In fact this is his second. It's also the second book I have read by him and I'm not exaggerating if I say that The Road and this is completely different. Night and day.

Anyway, I have to confess that had I known there was a religious theme to the book then I would have avoided it. Like Mr White I am a sceptic and I hate it when one character tries to convince another to believe. Mr Black isn't really preaching though. He is just trying to stop Mr White from carrying out his earlier intentions. He wants to save his life rather than his soul. So the religious content didn't so much bother me in the end.

The play was rather short and it took me no time at all to read. It was set in only the one room and I imagine it would have been quite interesting to go and see. As I have learnt from previous plays you can get as much out of them as novels. I just wish that maybe I had taken a little bit more time with it. Mr Black was the more interesting of the two characters. He has had a hard life and yet he goes out of his way to save someone completely different from himself. Mr White doesn't seem to appreciate and it's harder to gauge what Mr White is all about. Perhaps he himself doesn't know.

It was an interesting idea and I after weeks of mulling it over I have decided that I did like it. Glad I picked it up on a whim.
Posted by KarenSi at 02:59