The Wind Through The Keyhole - Stephen King 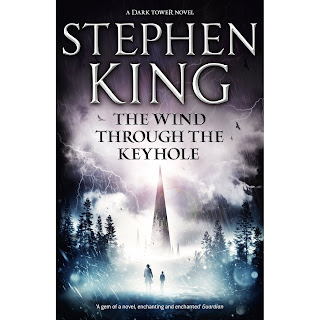 Roland, Susannah, Eddie, Jake and Oy are making their way towards the Dark Tower. Oy has been behaving strangely and Roland has an idea why. A sudden storm is about to descend on them. The kind that kills instantly and the only way to stay alive is to take shelter in a stone building. Thankfully one is close by and once they are settled the convince Roland to tell them a story. He tells them of the time he is sent by his father to investigate reports of a shape shifter killing some villagers. The reports turn out to be true and Roland must hunt the shape shifter down and kill him as his hunts are getting larger. One survivor is a young boy and to distract him Roland tells him the story of The Wind Through The Keyhole. A story his mum used to tell him when he was little.

That's right this is a story within a story within a story. To be honest it was disappointing. I was so excited to read this book. I have very fond memories of reading The Dark Tower books. There were so many things I loved about them such as links to this world, links to other King novels and all the other little surprises in there. Of course there was the characters themselves too which I loved. Some of that magic though seemed to be missing. There wasn't much in the way of Roland and his current ka. It was really just a way for Roland to tell a story. Really what is there is just to remind you of these characters and how they interact with each other.  Nothing more.

As for Roland's two stories. I actually found them to be a little dull. Roland's task wasn't particularly exciting or new. I suppose you learn a little more about his relationship with his mother and you learn a little about one of his friends who has been sent with him but not much else. The excitement of the tale doesn't really begin until the second half, after Roland has told his story to the little boy. Even then it's over fairly quickly.

The story Roland tells the little boy is much better. It's a little slow in starting and I do think some of it could have been edited out but it was still interesting. The story of a little boy who shows bravery in order to save his mother. Parts of it was a little obvious such as how his father died and the evil step father. Other than that I was intrigued by the forest and the evil magician.

Each of the three stories are linked together in some way. The obvious link is Roland but there are others in there if you look hard enough. The storm is one of those links although I couldn't help but picture The Day After Tomorrow.

In case  you are wondering the book is placed just after the fourth book in the Dark Tower series although King does say it can be read on it's own. Not the King's best work but still glad I read it.
Posted by KarenSi at 03:47